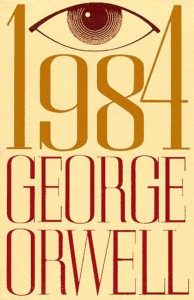 “1984” is a novel about totalitarianism and the fate of a single man who tried to escape from an overwhelming political regime. The book was written by the British writer and journalist George Orwell in 1948 and had the Soviet Union as a prototype of the social structure described in it.

Events in the book take place in London, a capital of Airstrip One, which is a province of the state of Oceania. The year is 1984, and the world is engaged in an endless omnipresent war. The political regime called Ingsoc (a misspelled abbreviation for English Socialism) constantly seeks out ways to control the minds and private lives of its citizens. The regime is run by the Party, headed by a half mythical Big Brother. The main protagonist of the novel is Winston Smith, an editor in the Ministry of Truth, which is responsible for propaganda. He has doubts about imposed dogmas that are shared by the majority, and at heart, he hates the Party and the Big Brother.

Winston buys a thick notebook where he writes down his thoughts about the reality that surrounds him. In his world, each step of the individual is controlled by the Thought Police, whose main function is to punish people who think differently from what is contained in the official propaganda. Everyone reports on each other, and even children are taught and encouraged to denounce their parents. Winston knows he commits a crime when he denies the Party’s slogan: “War is Peace. Slavery is Freedom. Ignorance is Strength,” but still he writes in his diary: “Down with the Big Brother.”

At work, Winston recalls recent “Two Minutes Hate” periods of time, when all Party members must gather in special rooms where they watch a short film about Emmanuel Goldstein, the former leader of the Party, who betrayed it and organized the underground movement called the Brotherhood. People are obliged to express hatred towards Goldstein’s image on the screen. During one of these periods, Winston fixates on O’Brien—a member of the most powerful Inner Party. For some reason, Winston imagines that O’Brien could be one of the leaders of the Brotherhood. He wants to talk to him, and he even has a dream in which O’Brien’s voice says: “We shall meet at the place where there is no darkness.”

After the Two Minutes Hate, he received a note from a girl named Julia that reads “I love you.” Julia is a member of the Anti-Sex League, so at first, Winston treats her with mistrust, and he even considers her to be a member of the Thought Police. However, she manages to prove to him that she hates the Party too and they start a love affair. It brings Winston to the thought that they are both doomed, because free romantic relationships between a man and a woman are prohibited. Julia is more optimistic about their situation, because she simply lives in the present moment and does not think about the future. They meet in an old second-hand shop in the Prols’ district—a place where people who have not yet joined the Party life. They seem to be more free and light-hearted than the rest of Airstrip’s One population.

Eventually, Winston and Julia get arrested. They are held separately, tortured, and interrogated. Winston is beaten by jailers and he is forced to confess to various crimes, legitimate and fictional. But still, the physical pain is nothing for him compared to the shock that he experiences when he meets O’Brien and finds that he is a loyal servant of the Big Brother. O’Brien uses a special device that causes incredible pain to “re-educate” Winston, make him love the Big Brother and adopt all the Party’s false dogmas. Winston resists and he declares that despite the fact that, under torture, he has betrayed everything he valued and believed in, there is one person that he is still devoted to: Julia. But here, Orwell depicts the Party’s endless possibilities to monitor the thoughts of each citizen in Oceania. The Party knows exactly what Winston fears most, though it is a secret for Winston himself. O’Brien puts a swarm of rats in front of his victim’s face and, driven to panic and horror, Winston finally cries: “Do it to Julia! Do it to Julia! Not me! Julia! I don’t care what you do to her. Tear her face off and strip her to the bones. Not me! Julia! Not me!”

The novel ends with a description of how Winston is sitting in a cafe, drinking gin. Sometimes he meets Julia occasionally, but they dislike each other now because they know that both of them are traitors. Winston looks at the screen, where an announcer gladly informs everyone that Oceania has won the recent war, and he understands that he now loves the Big Brother. The system managed to break and completely remake Winston.