“Catcher in the Rye” by J.D. Salinger

“The Catcher in the Rye”—a novel by Jerome D. Salinger, published in 1951—is one of the most brilliant novels in American literature of the 20th century. It describes the delicate inner world of a 17-year-old teenager, Holden Caulfield, who constantly reflects on the reality that surrounds him. “The Catcher in the Rye” was translated into almost all languages of the world, and has had a continuing impact on the minds of both adults and teenagers. 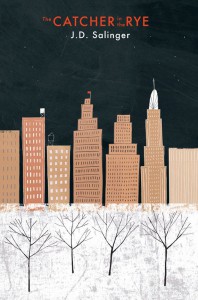 The novel starts from Holden’s expulsion from the Pencey Prep School for failing exams in almost all of his classes, except English. This is not the first time Holden has got kicked out of a school, but this time he has also quarreled with virtually everyone there. He decides to return to New York, where his parents live, but at some point he realizes that he cannot tell them that he was expelled. Thus, he checks into a hotel, planning to stay there for some time.

Holden finds it difficult both to live in this world, and to live outside of it. Trying to dispel his bad mood, he goes to a night club, but quickly gets bored and tired of it, so he returns to his hotel room. The lift operator, who also works as a souteneur, offers him to buy a prostitute. Holden agrees; when they both enter the room, Holden changes his mind, and the girl calls the souteneur: he punches Holden and extorts 10 dollars from him for his inaction.

Next morning, Holden arranges a date with Sally Hayes, a girl whom he dated in the past. Together they go to the theater to watch the play that Sally wanted to see. And once again, Holden gets disappointed: he finds the play foolish, and the actors, whom everyone admires, seem factitious to him. After the play, he and Sally go to skate, but since they both skate poorly, they decide to take a table instead. Holden tells Sally about the feelings of disappointment that overwhelm him in relation to the reality surrounding him; he keeps listing the aspects of life that he “hates,” and offers Sally to leave the city and settle down somewhere in Massachusetts, but then it turns out that Sally does not share his views. He mocks her, and after quarreling they break up.

After getting drunk with an acquaintance, Holden decides to visit his sister, Phoebe, who, as he says, is the greatest girl in the world. They discuss her school life, and then she asks him, what he is going to do with his life. Holden answers that all that he wants is to be the catcher in the rye. He describes how little children would be playing in the rye field, located on a high cliff; his task would be to catch those of them who gets too close to the edge, thus saving them from falling down. Then, willing to avoid meeting with parents and after borrowing some money prom Phoebe, Holden leaves.

He goes to Mr. Antolini’s, his former literature teacher’s residence. Mr. Antolini and his wife sympathize with Holden, and try to give him some advice, but he is too exhausted to delve into their meaning. He falls asleep; in the middle of the night he suddenly awakens, because he feels that Mr. Antolini is palming his forehead. Holden suspects his teacher in bad intentions, and escapes; later he understands that his suspicions were unreasonable, and becomes even more depressed.

Holden decides to leave to the West. He sends Phoebe a note, in which he asks her to come to the rendezvous, because he wants to give her back the money that he borrowed. Phoebe comes with packed suitcases—she wants to go with her brother, and Holden is extremely touched. For some moment, Phoebe starts to behave just like Holden, claiming that she got tired of everything, and Holden suddenly accepts the more responsible and mature point of view, for some time forgetting about his denial of everything around him. He dissuades Phoebe to leave, and together they go to the zoo; Phoebe rides the carousel, and Holden watches her with admiration.

There are two basic types of summaries: a reader summary, that you compose to develop a better understanding of what you have read, or a summary essay, which is written for others and is an overview of an original text. The point of writing a summary ess...
✕
Write with confidence at a college level