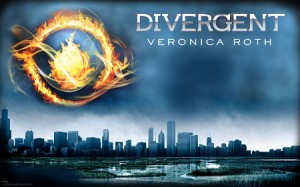 Divergent is the first book of a trilogy written by Veronica Roth, an American writer. It tells the story of a post-apocalyptic dystopia; the plot unfolds in post-war Chicago, where all of the people, after reaching 16 years old, must join one of the five strata in order to find their life niche for the rest of their lives. The novel, which was published in the USA on March 5, 2001, was called the best young adult fiction book of the year by many literary observers.

The novel tells the story of a 16 year-old girl Tris who is about to join one of the stratum named after certain traits of personality: Abnegation, Amity, Candor, Dauntless, and Erudite. The members of Abnegation, in which Tris has been born and raised, are able to act selflessly and sacrifice themselves to help others in need. Amity is devoted to the ideals of peace, kindness, and neutrality. Candor practices honesty, as its members believe it was total lies and deception which had led humanity towards devastating wars in the past. Dauntless cultivate strength, courage, and constantly seek ways of overcoming fear. The Erudite are focused on intelligence, curiosity, and knowledge; they are rivals with Abnegation.

Before the Choosing Day, Tris finds out she is a so-called divergent. It means she has an aptitude towards more than just one faction. Particularly, Tris has a potential to join Abnegation, Dauntless, and Erudite. She is told to keep this fact in secret, otherwise her life could be in danger, as faction leaders usually kill divergents. Tris decides to join Dauntless; to do it, she must successfully pass several challenges. Tris was examined for her physical capabilities; she also had to face various virtually simulated fears; finally, she had to face her own fears. Tris successfully passed all the tests and joined the Dauntless.

Meanwhile, Tris finds out the Erudite faction is carrying out plans to assault the Abnegation, who run the city. In their plans, the Erudite wish to use the Dauntless to their advantage. When the newcomers pass the initiation and get adopted by the Dauntless, they are all injected with a serum that is meant to track the position of the lost members of the faction. One night, the serum turns all the Dauntless into brainwashed mind-controlled somnambulants, and makes them attack the Abnegation faction. Tris and her instructor Four are divergents, so the serum does not affect them; they try to escape, but get caught by the Erudite. They are injected with a new version of the serum, designed especially for divergents, which separated one from each other.

Tris is then saved by her mother, who is also a divergent. During the escape, Tris finds her brother Caleb, but loses her parents—they get killed. Then Tris rescues Four, and together they manage to free the Dauntless from the serum’s influence, and leave to the Amity-controlled sector.