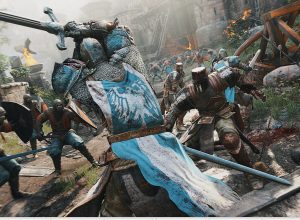 When something becomes ubiquitous, it tends to lose its uniqueness and complexity. I believe this is some sort of universal law opposite to the famous “quantity into quality” principle–and, unfortunately, equally valid and effective. At least, it works for the entertainment industry. Cinema, music, literature, cartoons, art: whatever you take, it will not be difficult to notice signs of degradation. Each particular song, movie, or book may stand out somehow, but if you zoom out and take a look at the genre it belongs to in general, you will probably lose it from sight.

Video games, as perhaps the most popular form of entertainment nowadays, is currently suffering from the same problem. Surprisingly, in the times when you needed to insert a magnetic tape cassette into your ZX Spectrum to play anything, games could offer more thrill and fun than today. Not because games were better, but mostly because the ideas they implemented were still new.

The amount of games repeating the same mechanics, exploiting the same principles, and differing only in “wrapping” is overwhelming. This is why it feels great to find something fresh today. To me, one of such games is “For Honor,” released by Ubisoft in 2017.

Now, I do not usually like Ubisoft games. I hate what they did to the Assassin’s Creed franchise (although I liked the second part). I am not a fan of the Far Cry series. I honestly think both Watch Dogs are boring, and the times I enjoyed Splinter Cell and stealth games are long gone. And so, I was surprised when I first saw a “For Honor” trailer.

As a kid, I loved knights. All the shining armor, heavy swords, medieval atmosphere, King Arthur stories–it was so fun to me. I also liked stories about vikings: bearded brutal raiders swinging two-handed axes, drinking mead in Valhalla upon death, terrifying coastal inhabitants with their drakkar ships. And, of course, I loved stories about ninjas and samurai, Japanese aesthetics, code of honor, you know. So when I thought what “For Honor” does, I paid my money for it without thinking: it clashes these three factions in an endless war.

At first glance, the game is awesome. Each of the factions has four basic characters, each representing a different class: vanguard, defender, assassin, and hybrid. Later, Ubisoft released several DLCs, adding two more characters per faction. In total, you get to choose from 18 characters, each with its own playing style, unique looks, fatalities, emotes, emblems, and a ton of other customizable options.

Next, you have a set of game modes: duels, 2vs2 brawls, 4vs4 fights, “capture the flag,” and Dominion. The latter is the most popular game mode: each team of four players needs to capture and hold a several strategic spot on a map. When one of the teams gets 1000 points, it “breaks” its opponents’ morale. If opponents die in this condition, they cannot respawn, and the team with the most points wins. If opponents recapture some of the spots, they rally, and can fight for some more time. They can even win the game, which often adds adrenaline and fun to matches.

There is also a Faction War screen, which shows the territories your faction controls. Each territory provides your faction with a bonus: boost to experience, additional loot dropping after each match, and so on. Each player upon winning or losing a match gains some amount of a resource called War Assets, which can be allocated to any territory. The faction whose players have more War Assets in a territory by the end of a certain time period conquers it. All the players in a faction that win a Faction War season (each of them lasts for about a month) receive in-game money, loot boxes, and other valuable items.

“For Honor” utilizes a unique fencing mechanic. Your character can strike from three directions: left, right, and up. There are two kinds of strikes–a faster but weaker one, and a powerful but slow one. These can be combined in chain attacks. Almost any strike can be blocked or parried: the latter staggers your opponent for a short period of time, allowing you to counter attack, or perform a unique move. There are guard breaks (helpful if your opponent is skilled in blocking and parrying), sweeping attacks, throws, feint attacks, dashing, dodging, rolling, and a ton of other moves.

The fighting mechanics in general can be described as, “easy to learn, hard to master,” and are extremely satisfying to use. Each duel is a deadly dance, in which only your skill with a particular character matters.

The graphics are extremely good. Shadows and lighting, fog, water effects, fire and explosions, glances and metal–everything looks great. You can feel the texture of every material in the game. At the same time, the game is well-optimized, so it mostly runs smoothly even on the not-so-new machines. My MSI GeForce GTX 970 provides me with 50-60 FPS 90% of the time. I only noticed frame drops during rainy weather, on two maps.

The characters are especially well-designed, both in terms of gameplay and the way they look. Each feels different. For example, there is Lawbringer: a threatening tower, armed with a gigantic halberd which he uses to counter enemies’ attacks and crowd control. Or, there is Raider: a furious Viking warrior with a two-handed ax, relying on brute force and several tricky feints. There is also Nobushi–a Japanese female warrior wielding a naginata, who prefers to attack her enemies from distance, dodging their attacks and poisoning them. There are many other characters as well, and each is unique. All of them are well-animated, their movements are smooth and natural. After playing one character for a while, you will notice that his or her pool of phrases is limited, so you will often find your character crying the same words out over and over again, but this is probably my own qualm with character design.

Unfortunately, I cannot say the same about netcode, and some gameplay aspects. Not so long ago, the game was using a direct peer-to-peer (P2P) connection for matchmaking. In practice, it meant that if a player hosting a game disconnected for some reason (rage quitting or game crashing, for example), the whole match would be screwed. This is not to mention constant synchronization, which caused the game to freeze for a couple of seconds every now and then. With recent updates, the game has been moved to direct servers, which made playing online more stable and fast. However, the game tends to kick players out for no reason: on average, I would receive one “game connection lost” message in about 10 matches.

Matchmaking is also a problem. The game often connects new players to skilled veterans, so often matches in Dominion mode turn into a massacre. This is not to mention the fact that the game named “For Honor” has a community that commonly has no idea about honorable fights. This is mostly related to Dominion mode, in which you will find yourself being attacked by two or three enemies simultaneously. For a skilled player, this may be a worthy challenge he or she is able to survive. For a newbie or for a casual player who wants to have some fun and play a game or two, it looks more like torture. Respawning time can take up to 15 seconds, characters tend to die quickly, and the community can be toxic. If you get attacked like this a couple times in a row, you will most likely find yourself raging and throwing your controller against the wall. In other words, if you are looking into the 1vs1 fighting aspect of this game, you should go to the Duels mode. It does not provide as much in-game experience and money as Dominion, but at least it is more honorable and fair.

Oh yes, in-game currency. It is called steel, and is mostly needed to buy loot boxes with random gear, or to purchase fatalities, emotes, decoration elements, and color schemes for your character. Gear does not affect gameplay much, so if you are familiar with your character but have no high-grade gear, you still have good chances against a fully-packed player. There are ways to earn in-game money–mostly through completing daily challenges, which can bring you 900-1400 steel. However, if you are new to the game, some of these challenges may be difficult for you; if you do not dedicate about 2-3 hours to the game every day, you will not be able to complete these challenges either. Considering that one loot box with gear costs 500 steel, or that fatalities (which restore a portion of your health upon execution) cost 5000-7000 steel each, you will have to do a lot of grinding in this game if you do not want to play with basic characters. Did I mention that you need to unlock characters? No? Well, you do. 8000 steel for standard characters, 15000 steel for DLC characters. No, of course you have access to the three basic characters–one per faction–but it is not fun to play with one fighter knowing there are 17 others.

Besides, not all of the characters are balanced well. My main problems are with the Shaman–she is fast, deals good damage, and is able to feint and interchange attacks on the fly. Many new players complain about the Centurion: his chains of attacks quickly drain your stamina, are almost impossible to break even for skilled players, and deal solid damage. These two are great for almost every game mode. At the same time, some other characters are not well-suited for some modes. For example, Lawbringer–my personal favorite–is great for Dominion, as he can withstand a lot of damage, and can protect a strategic point alone, fighting two or three characters long enough to wait for reinforcement. However, Lawbringer is a completely defensive character, whose combat tactics is built upon counterattacks. His attacking moves are slow and easy to dodge, so he might not be a fine choice for Duels. Or, let us take Shinobi: extremely agile and mobile, he is good to fight with in Duels, but his ridiculously low health pool make him a poor choice for Dominion matches.

Overall, “For Honor” is a good game–in any case, a much better game now than it was upon its release. It will take you some time to find your favorite character, and you will have to spend a lot of time grinding for in-game experience and money before you can fully customize your favorite fighter. You will be raging about toxic and dishonest opponents, or about the game’s matchmaking, which is awful, in my opinion. This is not to mention regular disconnects and annoying (although not crucial or game-breaking) bugs.

However, apart from this, “For Honor” is a ton of fun. A war between three iconic factions of knights, vikings, and samurai, fencing and duels, visual style, immersive gameplay, good graphics and animation, and the satisfaction you feel when you beat your enemy in an honorable duel–this is what I like the game for.

I would give it 7.5 out of 10. There is room to grow and develop, but so far it is already a good game. One of the first Ubisoft games I enjoyed since Assassin’s Creed II.