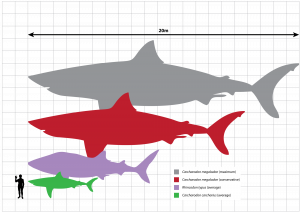 The first horror movie I ever saw was “Jaws”–an all-time classic filmed in 1975 by Steven Spielberg. My parents did not let me watch “Alien,” “Friday 13,” or any other cult thrillers, so I desperately wanted to see one. Kids in my class were bragging about watching this or that scary movie, and I remember envying them greatly. One day when my parents were out, and I was staying home, lazily clicking the TV remote, when all of a sudden a huge maw with razor-sharp teeth almost jumped out of the screen. It was already the middle of the movie and I did not get all the premise, but I still watched it till the end. Next day, I could finally boast of watching a horror film.

“Jaws” still evokes warm memories in me. This is why I was disappointed with the sequels: they could never recreate the feeling of imminent danger lurking beneath the sea surface. Besides, they were worse than the original in almost every aspect. Long story short, I like movies about sharks. I also like sharks in general, but even more than that, I admire prehistoric gigantic sharks: megalodons. So, when I saw trailers of “The Meg,” I knew what I wanted to watch.

Now, before you proceed to reading this review, let me make two tiny disclaimers. First of all, there are going to be minor spoilers ahead, so if you are one of those people who hate the idea of knowing what they are going to see in a movie, I recommend you to stop reading now. Secondly, I liked the movie, even though sometimes it feels cringely stupid. Okay, now let’s move on.

“The Meg” was filmed by Jon Turteltaub in 2018, and is based upon a novel by Steve Alten–at least, this is what Wikipedia says. I want to believe that the book–”Meg: A Novel of a Deep Terror”–is much more consistent than the movie, and matches the criteria of the sci-fi genre. The film, however, even though it is often related to “sci-fi” and “horror, is actually a typical popcorn action movie with Jason Statham. I have nothing against summer blockbusters; I guess I was just hoping to see a sci-fi horror movie about a huge shark—something like “Jaws.”

Anyways, the movie tells about a team of scientists financed by an eccentric billionaire who discover that the Mariana Trench is much deeper than it was believed before. What was considered to be its bottom turns out to be a dense layer of hydrogen sulfide forming a thermocline. This layer covers a whole new ecosystem, and to research it, scientists send a submersible with a team of three people: Lori, Toshi, and “The Wall” (I cannot recall this guy being named otherwise). When they penetrate the thermocline, they witness a rich variety of unique flora and fauna that has developed under the layer of hydrogen sulfide. However, soon after the discovery, the submersible is attacked by a huge squid–which, in its turn, gets attacked by a megalodon. The submersible is heavily damaged, Lori is wounded, and in order to save them, Dr. Minway Zhang–the head of the Mana One station, from which all the research is conducted–decides to fetch an experienced lifesaver. This lifesaver is Jason Stat… uh, Jonas Taylor, who had once faced a megalodon during a lifesaving operation, with tragic consequences.

I will not get into further details regarding the movie’s plot, except cases when I need to illustrate one claim that I make, or another. For now, let us focus on the movie’s strong sides, and gradually move to criticizing it.

“The Meg” is a distilled action movie–and I would even say it could serve as a decent example of how action movies should be made. The word “action” obviously implies people running around and all things fluttering and going boom. Unfortunately, Hollywood producers and directors sometimes seem to be forget about this, and we get to see such sluggish “action” movies as “Terminator: Genisys” (sorry, Arnie, but it sucked) or “Transformers: The Last Knight.” In this regard, “The Meg” reminded me of “Mad Max: Fury Road”: almost every minute of the movie is packed with events, and a few calm episodes only serve as transitions between intense action. One ordeal is changed by another, and the flux of tough situations the main characters have to overcome never stops. Due to this, “The Meg” is be watched in one breath. There was no such moment when I would feel like the movie was boring or slow: “The Meg” is packed with action up to the top.

I also enjoyed the visual aspect of the movie. I watched it in an IMAX theater (which is obviously the go-to technology for such movies), so I believe I experienced everything “The Meg” has to offer in terms of graphics and visuals. Mysterious underwater landscapes, enormous beasts, the hi-tech futuristic Mana One base, the megalodon–there is quite a lot to see in “The Meg.” Scenes when the characters are surrounded with smaller sharks, or when their submersibles get clenched in gigantic teeth are a breathtaking combination of beauty and thrill. All the action scenes are filmed masterfully, utilizing dynamic angles and perspective, which helps convey drama and pumps adrenaline in the moments when it was needed. Add nice 3D effects and the IMAX effect of presence, and you get a spectacular movie to watch.

My main rants about “The Meg” are related to the screenplay and the overall logic of actions. First of all, when Lori’s submersible (she is Taylor’s ex-wife, by the way) gets stuck deep under water, Dr. Zhang sends his people to seek for Taylor in Thailand. They go, find Taylor, take him to Mana One, he takes his time to get accustomed–and what, the submersible is still there? Like, is the shark just waiting for Taylor to arrive and save the day? While the scientists are searching for Taylor, Dr. Zhang’s daughter Suyin decides to dive in and rescue Lori’s crew herself. The whole time Taylor is travelling to Mana One, Suyin is submerging; she gets attacked by the same squid as Lori’s bathyscaphe. Taylor rushes for help… and reaches the bottom in just several minutes. It’s the Mariana Trench, Karl! Eleven kilometers! How?

Now, the fact that Lori is Taylor’s ex-wife changes nothing in the plot. It is the main argument for scientists to persuade Taylor take the job, and he acts all worried, but after Lori is saved, Taylor goes completely cold-turkey about her, paying much more attention to Suyin. Scientists quickly figure out they have to deal with a megalodon–but instead of approaching the matter with all due seriousness, they just crack jokes and do nothing to prepare to fight with the monster. They know the shark is 75 feet long–and what, they just sail off on a small boat to kill her? They use a super-tough ultra-modern shark cage–and what, they just dunk it underwater using a thin line and a flimsy crane? Their friends die in the shark’s maw–and what, they just move on right away? The amount of inconsistencies, logical flaws, and plot holes in “The Meg” is amazing. Usually, people start noticing flaws when watching a movie for the second or even third time. In the case of “The Meg,” you can see the flaws immediately; they just jump at you out of nowhere, yelling: “Behold, I am a huge hole in the logic of this movie!”

Oh, and for a movie dedicated to a huge prehistoric shark, I would really love to see more of it. There were several amazing moments with the megalodon showing off its jaws, or boasting of its enormous size, but I still feel like there could be more.

Other than this, there is not so much to talk about. The soundtrack and music are okay, although not memorable. Actors do their jobs: Jason Statham saves everyone multiple times, women adore Jason Statham, guys who are not Jason Statham either die heroically, or stay in the background. If you are looking for a nice action movie for a summer night, “The Meg” is something you might want to consider.