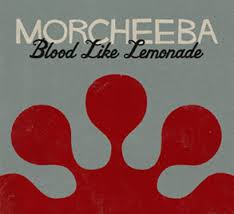 Morcheeba is one of those bands that does not have to be introduced, but here you go: this British band, founded in a distant 1995 still remains one of the music coryphaeus. Always experimenting with their sound, Morcheeba, however, sounded their best when they played with Skye Edwards, whom you can hear in their first four albums. After she left the band to start her solo career, Morcheeba still sounded great, but seemed to lack something crucial.

Well, Blood Like Lemonade, released in 2010, fixed this problem. First of all, Skye is back, and sounding as great as usual. Next—it is Morcheeba, with their classic downtempo sounding, trip-hop schticks, and the atmosphere of a late evening, megalopolis, and solitude.

The impression of the music is ambiguous though. On one side, it is relaxing and calming; you can easily listen through the whole album in the same breath. On the other hand, if you listen to it more than once, you’ll probably notice in general, that Blood Like Lemonade sounds rather monotonous; I would say nothing really changes from song to song, and the whole album sounds more like one long song that changes its tempo from time to time.

In its turn, how the lyrics combine with the music works well. Some of the songs are rhymed noir stories, such as Recipe for Disaster or Blood Like Lemonade. Even Though reminds of something any of us has to go through at least once in our lives (nothing specific, though—it is just this kind of feeling). The album covers different moods, be it calm contemplation in the instrumental Mandala, light and optimism in I Am The Spring, or philosophical feelings in Easier Said Than Done. Generally, the lyrics in this album are exactly the way it should be: simple, but supporting the musical architecture, having an abstract story behind each song.

Overall, Blood Like Lemonade is a pretty sweet album. Whereas the Godfrey brothers have not brought anything new to their music, they at least managed to keep the spirit of Morcheeba we all know back from the good old days.