Review of “Cool Kids” by Echosmith, from the album Talking Dreams. 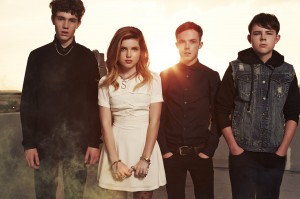 Released in 2013, it was a serious chart topper the following year, ultimately being #13 on the Billboards Hot 100. “Cool Kids” is from Echosmith’s debut album, which means they will have much more in store for the next few albums if they continue to make music.

Echosmith’s sound is indie pop, and they definitely reflect this notion in this song. I would say “Cool Kids” is a bit more pop than indie, with its auto-tone singing, catchy and repetitive lyrics, and lack of exploration. But the meaning of the lyrics is connected to indie music, though bluntly. I can see how the song got so popular, as it corresponds to the “loner kids” who don’t exactly fit into set social groups in school. Yet the delivery of the song suggests its intentions are merely for preying on people’s emotions and making people buy the song, rather than introspecting about its meaning seriously.

The song begins with an atmospheric synth line, which would indicate an indie song, but when the dull drums, plaintive guitar, basic bass, and all-too-normal main singer emerges, we already know it is a pop song. During the bridge, the back up vocals provide a more indie sound, but overall the song is dominated by a pop tone, which could almost be termed as new country rock.

The most cringe-worthy part of the song is the main vocals by Jamie Sierota. There is nothing unique in her voice and she might as well have been a machine singing over a machine track. There is no special flavor in her voice and no strong emotional substance felt. Her vocals might leave you half-cheering for kids who get left behind in social circles, but nothing more.

The lyrics are too simplistic, as the sentiment conveyed could have been much more deftly expressed. It is not simplistic like Gwendolyn Brooks’ poetry, for example, where subtle meaning pours through after rereading. It is rather a plain emotion written in an almost robotic way—a true mark of present day’s pop music.

On a positive note, “Cool Kids” is not jarring to listen to. It is rather pleasant to sit back and drone out to. It has a relaxed, slightly melancholic feel. Although it doesn’t convey its emotion properly, it still is a decent listen when you want to chill out or are doing homework.