The 40 Hours that Shook European Elites (and the Timid Left) 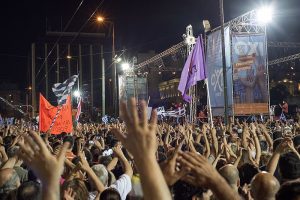 The period from the evening of Tuesday, the 1st of November until the afternoon of the 3rd of November 2011 will be remembered as the time when a specter was haunting Europe—the specter of a Greek referendum. The story, in short, is as follows: for reasons of political maneuvering or bluffing, having lost any kind of legitimacy from a population in constant unrest, Prime Minister George Papandreou declared a referendum for the Greek people to accept or reject the 26th of October agreement between Greece and the Troika (IMF, EU, ECB) regarding the Greek debt ‘haircut’ and probably another unbearable austerity package (number six or seven, for anyone who still has the courage to count). The reaction was fierce from all possible sides, nationally and internationally. Angela Merkel and Nicholas Sarkozy immediately called Papandreou to Cannes, where the G20 was meeting, and taught him the lesson that just because he was the Greek Prime Minister does not mean he could make decisions about serious issues on his own. Papandreou flew back to Greece to find the whole political class in panic and his MPs ready to resign if necessary in order to avoid the referendum. Within hours, he called off the referendum and there was a return to normality, with the two big parties discussing terms behind closed doors for a coalition government. These 40 hours, however, gave us lessons of a lifetime.

In this article, I will claim that what we experienced in this one day and a half was, first of all, the symbolic death of whatever was left of the ideal of popular and national sovereignty in European Union. This is too obvious, however, and has been manifested many times in the past. The even more worrying conclusion to be drawn from this crisis concerns the fear, reluctance, and unreadiness of big parts of the Left and its intellectuals in the face of a major opening of the field for a rupture with the established order of things and from business as usual. Some might say such a criticism is too abstract. They will point out that the idea of a referendum at a moment when the Greek economy and society were already beyond the threshold of collapse was a kind of political blackmail, initiated by the status quo, with only one possible answer and a huge risk for the people to take. The actual question, they say, would not be whether Greece is accepting the agreement, but whether Greece wishes to remain in the Eurozone. If this is the question, bring it on, would be my first reply. Since when is the Eurozone a sacred cow whose existence is above anyone’s jurisdiction? In addition, I believe that my points are relevant irrespective of the above facts, and will apply in the many more political crises that are expected in Europe.

The pretense of democratic sovereignty was undermined first and foremost by the elites in Greece. Within only a couple of hours of Papandreou’s announcement, the Conservative ex-PM Konstantinos Mitsotakis encouraged government MPs to bring Papandreou down with a parliamentary ‘coup,’ so as to save country from the ‘catastrophe’ of a referendum. The leader of the opposition, the Conservative Antonis Samaras, also said he would do anything he could to avoid the referendum and considered withdrawing all his MPs from parliament, in order to bring down the government. At the same time, MPs and ministers from the ruling social-democratic party (PASOK) expressed their disapproval of the referendum, and some even considered resignation. The mainstream Greek media also characterized the prospect of a referendum as catastrophic. The main line was that “the deal with the Troika and, therefore, our status as members of the Eurozone, is too big an issue to risk asking the people” and that “referendums sometimes give the wrong answers.”

Nobody of the above bothered to explain since when getting peoples’ approval for an issue that will affect our lives probably for decades is a ‘catastrophe.’ In addition, the arrogance of the liberal elites, considering themselves the only ones enlightened enough to judge what is the ‘correct answer’ to a referendum, is proverbial. Nevertheless, things got even worse. When the ominous prospect of a referendum was called off, the ruling party’s opinion makers rushed also to fend off the prospect of national elections. Elections at this specific time, they mentioned, might, guess what, risk our place in the Eurozone. What we see here, and there is not even an attempt to conceal this, is democracy in its most fundamental level presented as a barrier to the freedom of capitalist elites. Democracy and the will of the people are burdens that must to be overcome in any possible way. The Greek people, who in the past two years have suffered the harshest austerity measures in the post-war history of western countries, are paternalistically considered by the elites incapable not only of understanding whether the Euro is good or bad for them, but even incompetent to vote in national elections. Not long ago, one opinion-former and guru of neoliberalism, said elections in Greece are useless, since we more or less already know their results (people expressing their disapproval for the Troika’s custody parties).

But if all this is happening to the distant and retrograde Greece, what about the European Union? There, the reaction to the idea of a Greek referendum was even more shockingly cynical. Leaving aside the excessively critical comments by all the EU leaders, the head of the Eurogroup, the IMF etc, authoritarianism went a step further. German Chancellor Angela Merkel declared that there could only be one possible answer to the referendum, and this is ‘yes’ to the agreement with the Troika. We even experienced the surreal situation where the German Chancellor announced to the Greek people the actual day of the referendum. Greek government ministers on Tuesday night were mentioning January as the most likely time; Merkel, however, had different plans, and one day later announced to the media that if there were going to be a referendum, it would take place on the 4th of December! Please do not be confused, we are still talking about the Greek referendum!

For someone well aware of the history of the undemocratic, bureaucratic, unaccountable, and market-driven European Union, such behavior was not a surprise. Brussels’ elites feel uncomfortable when the European people get a say in matters that affect their lives. Remember the Danish referendum in 1992, rejecting the Maastricht Treaty, and its repetition in 1993, when finally the ‘correct’ answer was given. The French and Dutch ‘no’ to the European Constitution in 2005 reminded EU technocrats how easily people can make ‘mistakes’ when left alone, even for one minute in the voting room. The Irish proudly rejected the Lisbon Treaty in 2008, despite the ‘Denkverbot’ on voting ‘no.’ Again, all conceivable propaganda mechanisms were put into operation, terrorizing Irish people and imposing a second referendum and a ‘yes’ one year later.

The most disheartening conclusion to be drawn from this crisis-situation, however, was the lack of a strategy, and the lack of faith in the people shown by by the Left. Both the parliamentary and extra-parliamentary Left considered the referendum a ‘false dilemma’ and asked instead for elections. The radical Left in Greece has always considered the European Union as the watchdog of European capital and a barrier to developing a different model of development and progress for the Greek people. Nevertheless, when the moment came, for the first time in 30 years, to challenge this burden, they seemed to consider the situation unbearable, and were afraid to step forward and lead. Many agree that had the referendum been held, ‘no’ could have won. What a fantastic prospect for the Left, one would think, to stake a claim on popular opinion, as the only political force actually standing for ‘no.’ Alas… the Communist Party—currently stronger than ever in its recent history—even worried that the Greek people could be ‘confused’ by the propaganda of the EU and big capital in favor of ‘yes.’ So much for having faith in the people who only two weeks before held another Earth-shaking two-day general strike, with half a million protesters on the streets and one worker dead from police gas.

The Greek situation should teach us wider lessons. Slavoj Zizek is right to observe that the Left in this era of crisis is like a cheating husband: he keeps hoping for his wife’s disappearance from the scene, leaving him alone with his mistress. But when the wife finally leaves, he realizes his symbolic universe has collapsed, and is unable to handle the new situation he was so looking forward to. The same happens with the Left. The long anticipated capitalist crisis is here… and the Left has no idea what to do with it. Trust in people and the self-confidence for a great leap forward seem to be off the agenda. Even in countries like Greece where it is powerful and ideologically coherent, it seems the Left is taking its risk assessments too seriously. Nevertheless, it’s extremely unlikely that there will ever be any statistical model signifying that the time for a big event has come and that victory is guaranteed.

Another vital lesson for anyone considering himself progressive or radical is that the current status quo, during a turbulent capitalist crisis, is putting up a battle for survival, and is eager not to lose. This leads to two conclusions. The first is that opportunities need to be grasped; and this means being well prepared to act. In Greece, there seemed to be a complete power vacuum for some 30 hours, but the initiative was soon back in the hands of the bourgeois elites, as the Left had not even made a clear decision on whether it wanted the referendum or not. The second and more important lesson is that such a power system will not collapse by itself, no matter how delegitimized it is. This should be a clear message to the current ‘Occupy’ trend in the US and the UK, which, although showing considerable courage, is based on a ‘we told you so’ attitude, a moralism, and even the celebration of not having a plan.

Pointing out that the current system and its advocates are corrupt is like knocking on an open door. The Greek and European elites declared openly in recent days that democracy is an annoying burden for them. Us repeating it continuously and presenting our moral superiority leads nowhere. A Left which is frightened, repetitive, and prepared only to occupy a square or win a small percentage in the elections, is the last thing we need. The current situation requires us to stop occupying squares and start thinking how we can provide the vision to inspire people and then possibly ‘occupy’ the center of political life itself. The long forgotten slogan ‘dare to win’ is today more appropriate than ever.

This was written under a Creative Commons License, with editing: https://creativecommons.org/licenses/by/1.0/

Articles are generally defined as short pieces of writing of a non-fiction nature. They are used widely in journalism, creative writing, and online and offline publishing. Whe...
✕
Write with confidence at a college level