Being a Poet is Easier than You Think 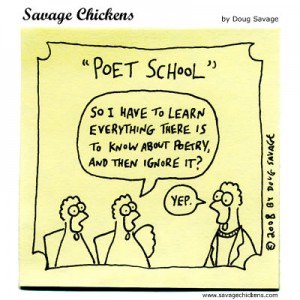 The common populace believes poetry is beyond them. They have jammed the thought in their brains that poetry is a highfalutin art form designed for individuals that are either eccentric, unreasonably wealthy, or gung ho about being liberal. What the majority of people don’t grasp is that poetry is right under their fingers and they can write it as fluently as a shopping list (and some poetry looks like a shopping list, unfortunately).

Poetry is as simple as appreciating—appreciating the sounds of words and phrases, how beautiful or strange an object or someone looks, how a place smells, and all the other sense-interactions that can be applied to experiencing the natural and artificial world.

Opening up a conversation with others and ourselves about how we engage intimately with our surroundings and what is inside ourselves is a large part of what makes poetry “poetic.” We understand existence through our senses: smelling, touching, hearing, tasting, and seeing. How we feel while we observe these senses is unique to ourselves, or some might say, unique enough.

In our originality of sense perception, we can provide new ways of perceiving common objects and circumstances. The two main avenues for describing a subject in a poem is by either a simile or a metaphor.

A simile usually functions by the word “like” or “as.” In poetry, we compare disparate objects or instances to create a mood or meaning. Here’s an example of a simile: “I love you like eating apple pies on a Sunday evening.”

A metaphor, on the other hand, stretches the imagination a bit more. Instead of saying a subject is like another subject, metaphors point out that a subject is another subject. Here’s an example of a metaphor: “As your elusive lover, I am a crow that drifts through the night of your dreams.”

Take the following poem for a quick study of similes, metaphors, and the act of delving into our sense perceptions:

The metaphor in the poem occurs when the poet states that, “…its body is a question that hangs….” The poet recreates the idea of smoke as a body, initially. After the image of smoke is established as a body, the poet then tells the reader it is actually a question that hangs in the sky. There is one simile in this poem and it is easy to spot: “…like a blinking star.”

In writing this poem, the poet transformed a commonly-known phenomena, chimney smoke, into a sight that could be said to be mystical or introspective. The title of the poem gives a clue to the reader that the poet is searching for possible answers or is not fixed upon a certain path, as is referred by the word “wandering.” By way of describing a late night walk around a lake and seeing (the sense perception prevalent in this poem) chimney smoke along the way, the poet has led us on a journey of images and thought towards understanding the author’s emotional state.

Poetry can come naturally to you if you engage your senses with keen awareness. The technical aspects of poetry are not as pertinent as being in the present moment and observing the inner and outer world with fresh fascination. Give up your ideas about poetry being an exclusive activity for individuals on the periphery. Poetry is waiting for us in each circumstance we are in and in each person we meet. Finding it only requires us to be open to it and open to what we truly feel.