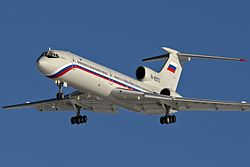 The Tupolev Tu-154 was heading to Syria and was carrying 64 members of the Alexandrov Ensemble, Russia’s military choir. Nobody is thought to have survived. At least eleven bodies have been recovered and 100 divers deployed on-scene. President Vladimir Putin has ordered a probe; investigators have yet to rule out sabotage.

The 84 passengers and eight crew were headed to Hmeymim Air Base to entertain Russian forces. Musicians, dancers, and journalists are among the dead. Choir leader Valery Khalilov and philanthropist doctor Yelizaveta Glinka, who was taking donated medical supplies to Syria, were on board. Nine journalists representing three national TV stations were also passengers.

Glinka served as a human rights adviser to Putin. The journalists were from official broadcasters NTV, First Channel, and Zvezda.

An official statement said Putin sent his “deepest condolences to the families and friends of those killed in the crash.” He has tasked Prime Minister Dmitry Medvedev with organizing an investigatory commission. The defense ministry said a military commission was in Sochi to investigate. “Four ships, five helicopters, and a drone are working in the area,” a defense spokesperson said.

The Tu-154 is a Soviet-era three-engine jet. It crashed after leaving Sochi International Airport at 5:40am local time. Debris has been found around 1.5km (a mile) offshore in water about 50–70m (160–230 feet) deep. Sochi was a stopoff for the plane, which began its journey in Moscow.

Russian media broadcast what was claimed to be an air traffic control recording showed no sign of impending disaster; the flight crew spoke calmly, then suddenly stopped responding. Weather was good at the time.

Putin has declared today a day of national morning. Syrian President Bashar al-Assad sent condolences to him. “The plane had dear friends who had come to join us and the people of Aleppo in their joy with victory and Christmas feasts,” he said. The Syrian President also told Putin “our sorrows and joys are one” and the two nations are united to “fight to lay the foundations of stability, security, and peace.”

[This article was first shown in WikiNews, with editing changes: https://en.wikinews.org/wiki/Plane_carrying_92_crashes_into_Black_Sea_near_Sochi]