The Birth of the Electron 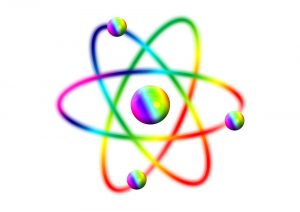 Nineteenth-century physicists spent a lot of time trying to come up with wild, random ways to play with electricity. The best experiments of this kind were the ones that made big sparks or pretty colors of light.

One such parlor trick was the cathode ray. To produce it, you first had to hire a good glassblower and find a good vacuum pump. The glassblower would create a hollow tube and embed two pieces of metal in it, called the electrodes, which were connected to the outside via metal wires passing through the glass. Before letting him seal up the whole tube, you would hook it up to a vacuum pump, and spend several hours huffing and puffing away at the pump’s hand crank to get a good vacuum inside. Then, while you were still pumping on the tube, the glassblower would melt the glass and seal the whole thing shut. Finally, you would put a large amount of positive charge on one wire and a large amount of negative charge on the other. Metals have the property of letting charge move through them easily, so the charge deposited on one of the wires would quickly spread out because of the repulsion of each part of it for every other part. This spreading-out process would result in nearly all the charge ending up in the electrodes, where there is more room to spread out than there is in the wire. For obscure historical reasons, a negative electrode is called a cathode and a positive one is an anode.

Were cathode rays a form of light, or matter? At first no one really cared what they were, but as their scientific importance became more apparent, the light-versus-matter issue turned into a controversy along nationalistic lines, with the Germans advocating light and the English holding out for matter. The supporters of the material interpretation imagined the rays as consisting of a stream of atoms ripped from the substance of the cathode.

One of our defining characteristics of matter is that material objects cannot pass through each other. Experiments showed that cathode rays could penetrate at least some small thickness of matter, such as a metal foil a tenth of a millimeter thick, implying that they were a form of light.

Other experiments, however, pointed to the contrary conclusion. Light is a wave phenomenon, and one distinguishing property of waves is demonstrated by speaking into one end of a paper towel roll. The sound waves do not emerge from the other end of the tube as a focused beam. Instead, they begin spreading out in all directions as soon as they emerge. This shows that waves do not necessarily travel in straight lines. If a piece of metal foil in the shape of a star or a cross was placed in the way of the cathode ray, then a “shadow” of the same shape would appear on the glass, showing that the rays traveled in straight lines. This straight-line motion suggested that they were a stream of small particles of matter.

These observations were inconclusive, so what was really needed was a determination of whether the rays had mass and weight. The trouble was that cathode rays could not simply be collected in a cup and put on a scale. When the cathode ray tube is in operation, one does not observe any loss of material from the cathode, or any crust being deposited on the anode.

Nobody could think of a good way to weigh cathode rays, so the next most obvious way of settling the light/matter debate was to check whether the cathode rays possessed electrical charge. Light was known to be uncharged. If the cathode rays carried charge, they were definitely matter and not light, and they were presumably being made to jump the gap by the simultaneous repulsion of the negative charge in the cathode and attraction of the positive charge in the anode. The rays would overshoot the anode because of their momentum (although electrically-charged particles do not normally leap across a gap of vacuum, very large amounts of charge were being used, so the forces were unusually intense).

Physicist J.J. Thomson at Cambridge carried out a series of definitive experiments on cathode rays around the year 1897. By turning them slightly off course with electrical forces, he showed that they were indeed electrically charged, which was strong evidence that they were material. Not only that, but he proved that they had mass, and measured the ratio of their mass to their charge, m/qm/q. Since their mass was not zero, he concluded that they were a form of matter, and presumably made up of a stream of microscopic, negatively-charged particles. When Millikan published his results fourteen years later, it was reasonable to assume that the charge of one such particle equaled minus one fundamental charge, q=−eq=−e, and from the combination of Thomson’s and Millikan’s results, one could therefore determine the mass of a single cathode ray particle.

The basic technique for determining m/qm/q was simply to measure the angle through which the charged plates bent the beam. The electric force acting on a cathode ray particle while it was between the plates was

There was just one catch. Thomson needed to know the cathode ray particles’ velocity in order to figure out their acceleration. At that point, however, nobody had even an educated guess as to the speed of the cathode rays produced in a given vacuum tube. The beam appeared to leap across the vacuum tube practically instantaneously, so it was no simple matter of timing it with a stopwatch!

Thomson’s clever solution was to observe the effect of both electric and magnetic forces on the beam. The magnetic force exerted by a particular magnet would depend on both the cathode ray’s charge and its speed:

Thomson played with the electric and magnetic forces until either one would produce an equal effect on the beam, allowing him to solve for the speed,

Knowing the speed (which was on the order of 10% of the speed of light for his setup), he was able to find the acceleration and thus the mass-to-charge ratio m/qm/q. Thomson’s techniques were relatively crude (or perhaps more charitably we could say that they stretched the state of the art of the time), so with various methods, he came up with m/qm/q values that ranged over about a factor of two, even for cathode rays extracted from a cathode made of a single material. The best modern value is m/q=5.69×10−12m/q=5.69×10−12 kg/C, which is consistent with the low end of Thomson’s range.

What was significant about Thomson’s experiment was not the actual numerical value of m/qm/q, however, so much as the fact that, combined with Millikan’s value of the fundamental charge, it gave a mass for the cathode ray particles that was thousands of times smaller than the mass of even the lightest atoms. Even without Millikan’s results, which were 14 years in the future, Thomson recognized that the cathode rays’ m/qm/q was thousands of times smaller than the m/qm/q ratios that had been measured for electrically charged atoms in chemical solutions. He correctly interpreted this as evidence that the cathode rays were smaller building blocks—he called them electrons—out of which atoms themselves were formed. This was an extremely radical claim, coming at a time when atoms had not yet been proven to exist! Even those who used the word “atom” often considered them no more than mathematical abstractions, not literal objects. The idea of searching for structure inside of “unsplittable” atoms was seen by some as lunacy, but within ten years Thomson’s ideas had been amply verified by many more detailed experiments.