The Quest for the Atomic Force

“Where the telescope ends, the microscope begins. Which of the two has the grander view?” 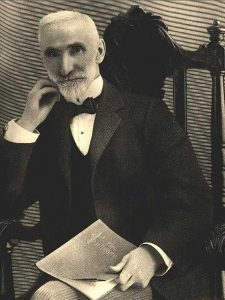 His father died during his mother’s pregnancy. Rejected by her as a boy, he was packed off to boarding school when she remarried. He himself never married, but in middle age he formed an intense relationship with a much younger man, a relationship that he terminated when he underwent a psychotic break. Following his early scientific successes, he spent the rest of his professional life mostly in frustration over his inability to unlock the secrets of alchemy.

The man being described is Isaac Newton, but not the triumphant Newton of the standard textbook hagiography. Why dwell on the sad side of his life? To the modern science educator, Newton’s lifelong obsession with alchemy may seem an embarrassment, a distraction from his main achievement: the creation of the modern science of mechanics. To Newton, however, his alchemical research were naturally related to his investigations of force and motion. What was radical about Newton’s analysis of motion was its universality: it succeeded in describing both the heavens and Earth with the same equations, whereas previously it had been assumed that the sun, moon, stars, and planets were fundamentally different from earthly objects. But Newton realized that if science was to describe all of nature in a unified way, it was not enough to unite the human scale with the scale of the universe: he would not be satisfied until he fit the microscopic universe into the picture as well.

It should not surprise us that Newton failed. Although he was a firm believer in the existence of atoms, there was no more experimental evidence for their existence than there had been when the ancient Greeks first posited them on purely philosophical grounds. Alchemy labored under a tradition of secrecy and mysticism. Newton had already almost single-handedly transformed the fuzzyheaded field of “natural philosophy” into something we would recognize as the modern science of physics, and it would be unjust to criticize him for failing to change alchemy into modern chemistry as well. The time was not ripe. The microscope was a new invention, and it was cutting-edge science when Newton’s contemporary Hooke discovered that living things were made out of cells.

“Newton was not the first of the age of reason. He was the last of the magicians.”

Nevertheless, it will be instructive to pick up Newton’s train of thought and see where it leads us with the benefit of modern hindsight. In uniting the human and cosmic scales of existence, he had reimagined both as stages on which the actors were objects (trees and houses, planets and stars) that interacted through attractions and repulsions. He was already convinced that the objects inhabiting the microworld were atoms, so it remained only to determine what kinds of forces they exerted on each other.

His next insight was no less brilliant for his inability to bring it to fruition. He realized that the many human-scale forces—friction, sticky forces, the normal forces that keep objects from occupying the same space, and so on—must all be expressions of a more fundamental force acting between atoms. Tape sticks to paper because the atoms in the tape attract the atoms in the paper. My house does not fall to the center of Earth because its atoms repel the atoms of the dirt under it.

Here he got stuck. It was tempting to think that the atomic force was a form of gravity, which he knew to be universal, fundamental, and mathematically simple. Gravity, however, is always attractive, so how could he use it to explain the existence of both attractive and repulsive atomic forces? The gravitational force between objects of ordinary size is also extremely small, which is why we never notice cars and houses attracting us gravitationally. It would be hard to understand how gravity could be responsible for anything as vigorous as the beating of a heart or the explosion of gunpowder. Newton went on to write a million words of alchemical notes filled with speculation about some other force, perhaps a “divine force” or “vegetative force” that would for example be carried by the sperm to the egg.

Luckily, we now know enough to investigate a different suspect as a candidate for the atomic force: electricity. Electric forces are often observed between objects that have been prepared by rubbing (or other surface interactions), for instance when clothes rub against each other in the dryer. A useful example: stick two pieces of tape on a tabletop, and then put two more pieces on top of them. Lift each pair from the table, and then separate them. The two top pieces will then repel each other, as will the two bottom pieces. A bottom piece will attract a top piece, however. Electrical forces like these are similar in certain ways to gravity, the other force that we already know to be fundamental:

Electrical forces are universal. Although some substances, such as fur, rubber, and plastic, respond more strongly to electrical preparation than others, all matter participates in electrical forces to some degree. There is no such thing as a “nonelectric” substance. Matter is both inherently gravitational and inherently electrical.

Furthermore, electrical forces make more sense than gravity as candidates for the fundamental force between atoms, because we have observed that they can be either attractive or repulsive.