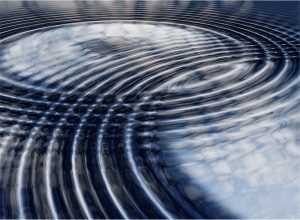 There are three main ways in which wave motion differs from the motion of objects made of matter.

The most profound difference is that waves do not display anything analogous to the normal forces between objects that come in contact. Two wave patterns can therefore overlap in the same region of space. Where the two waves coincide, they add together. For instance, suppose that at a certain location in at a certain moment in time, each wave would have had a crest 3 cm above the normal water level. The waves combine at this point to make a 6-cm crest. We use negative numbers to represent depressions in the water. If both waves would have had a trough measuring -3 cm, then they combine to make an extra-deep -6 cm trough. A +3 cm crest and a -3 cm trough result in a height of zero, i.e., the waves momentarily cancel each other out at that point. This additive rule is referred to as the principle of superposition, “superposition” being merely a fancy word for “adding.”

Superposition can occur not just with sinusoidal waves. A pulse is a wave of very short duration. These pulses consist only of a single hump or trough. If you hit a clothesline sharply, you will observe pulses heading off in both directions. This is analogous to the way ripples spread out in all directions when you make a disturbance at one point on water. The same occurs when the hammer on a piano comes up and hits a string.

Experiments to date have not shown any deviation from the principle of superposition in the case of light waves. For other types of waves, it is typically a very good approximation for low-energy waves.

The medium is not transported with the wave.

Suppose you have a series of water waves before reaching a rubber duck, having just passed the duck (middle), and having progressed about a meter beyond the duck. The duck bobs around its initial position, but is not carried along with the wave. This shows that the water itself does not flow outward with the wave. If it did, we could empty one end of a swimming pool simply by kicking up waves! We must distinguish between the motion of the medium (water in this case) and the motion of the wave pattern through the medium. The medium vibrates; the wave progresses through space.

A wave’s velocity depends on the medium.

A material object can move with any velocity, and can be sped up or slowed down by a force that increases or decreases its kinetic energy. Not so with waves. The magnitude of a wave’s velocity depends on the properties of the medium (and perhaps also on the shape of the wave, for certain types of waves). Sound waves travel at about 340 m/s in air, 1000 m/s in helium. If you kick up water waves in a pool, you will find that kicking harder makes waves that are taller (and therefore carry more energy), not faster. The sound waves from an exploding stick of dynamite carry a lot of energy, but are no faster than any other waves. Thus, although both waves and physical objects carry energy as they move through space, the energy of the wave relates to its amplitude, not to its speed.