How I Met Master Yi

(…) Before I finally met Master Yi, I was a guy people usually called a “troubled teen.” I lived in sleeping quarters on the outskirts of Detroit, in a small, tacky apartment together with my parents and two little brothers. My parents are compassionate and patient people, but back then they lacked finances to give me a proper education, to pave my way for a better future, or simply take up my upbringing—each of them worked at two-three jobs just to make ends meet; I didn’t even know what kind of jobs they were. And I doubt that I would want to walk the road to a better future, actually. All I was interested in was hanging out with my chums, wandering the streets, extorting easy money from suckers, and earning my living by small thefts in local grocery stores. Almost all of my friends were smoking pot or using heavier drugs, and though I luckily escaped these problems, cigarettes and alcohol were my permanent attributes. 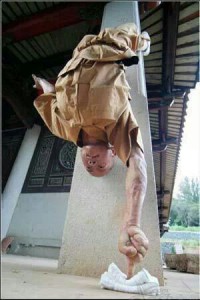 One day, me and two mates of mine ran into a decently dressed couple, who by some unfortunate circumstances, drifted to our desperate district. There were three of us, and we expected easy money: guys with girlfriends were usually less heroic, because they couldn’t run away leaving their significant others behind (though I’ve seen some exceptions), and couldn’t fight. And, once again, these two looked rather respectable. I can’t remember the details right now—they don’t matter anyway. All I can say is that the guy and his girl beat the dust out of us in a couple of seconds. Of course, we were disappointed and abased, and told none of our mates about this occasion; bruises and cuts were rather common in the streets, so no one asked.

I would like to say this incident made me revise my priorities and change my way of living, as it often happens in movies, but the truth is that I did my best to forget about this humiliation as soon as possible.

It all got even worse. I got arrested several times, and had to pay a couple of huge fines. My mother got fired from her job, and spent weeks in an effort to find a new workplace, so father had to tear between working and home; I did nothing for the family—at least nothing good.

During my misadventures, I met all kinds of underdogs and marginals; one of them, Jab, whom I made friends with, used to be a junior champion in Muay Thai, but ended up in a street gang. He was the first person who showed me the difference between an ordinary brawl and efficient combat. He taught me the basics, but later fate scattered us across the continent; he left to the western coast, and I stayed in Detroit. But the strong interest in martial arts that Jab transmitted to me remained, and I started to spend more time in gyms than on the streets.

Changes in my life started seemingly on their own, but now I can see that it was no one but me who pulled myself out from the pit I lived in. Back then, I desperately needed money to pay for training, and I couldn’t regularly scrape the necessary funds together by robbing drunk passers-by; so I had to do some job hunting, and finally got employed at “8th Street Meals” cook shop. Booze and smoking also hindered me greatly: my breath hitched from almost any small move, my muscles were weak, and I was constantly feeling sluggish. After numerous desperate attempts, I managed to quit both these habits, which makes me proud of myself, even now. No need to say my parents were shocked and close to happiness, though I still remained a grim and pissed-off lad, who needed martial arts more for fighting and throwing out the aggression than for something else. I went into boxing, muay thai, and karate, but quit each sport after 6-8 months. They were all great, but somehow I didn’t feel comfortable there; I felt like I needed something else.

One day, I saw an old Chinese action movie, where all the characters were flying like devils, and their fists shot out with incredible speed. I knew that it was only a movie, but still I was impressed by Kung Fu—that was how those guys’ art was called (later I knew that it is the wrong term, and that “Wushu” is the correct one). Sure thing, I started to seek a Wushu club in my neighborhood (…).

A memoir is a literary genre that entails writing about previous events in your life, such as certain life lessons, fascinating stories, miraculous recoveries or rescues, or any ot...