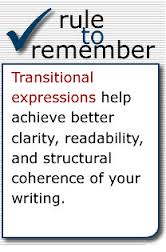 The information presented in any academic paper must be structured and well-organized in order to convey its meaning clearly. To make readers’ attention flow from one idea to another smoothly, and to make the paper readable by connecting its semantic parts and indicating their relationships, transition words and phrases are used.

The material you describe can be divided into two parts: facts which you introduce, and the relationships you construct between them. Transitions prepare readers for understanding upcoming information by alerting them as to how they should react to presented ideas, and how to piece them together into a logically-coherent argument. In other words, transitions are meant to make the organization of your paper easier to follow.

There are a variety of transitions, and this guide observes those that are used most commonly.

Transitions can be divided into several categories: Addition, Compare and Contrast, Time, Cause and Effect, Summary and Conclusion, and Example.

Compare and Contrast transitions are used to make it clear for the reader how two or more items are going to be analyzed in relation to each other, or how characteristics of one item that another one doesn’t possess are going to be introduced.

Time transitions usually serve to show how events are related to each other in terms of time; these transition words help readers follow the sequence of events and structure them in the order in which they occurred.

Cause and Effect transitions show how certain circumstances or events were caused by other factors. They make it easier for the reader to follow the logic of the arguments and clauses represented in paper.

Summary and Conclusion transition words indicate the author of the paper has listed all of their arguments on a respective issue, and is summarizing the information in a brief manner.

Example transitions notify the reader how the upcoming information will serve as an illustration or explanation of the described material.

Addition:
furthermore, in addition, besides, also, even more, moreover, again, as well, equally important, together with, along with

Compare and Contrast:
comparable to, just as, in the same manner, as if, in comparison, likewise, accordingly, although, as opposed to, however, even though, on the contrary, on the other hand, otherwise

Time:
in the meantime, meanwhile, until, when, next, immediately, before, after, afterward, as soon as, subsequently, following

Cause and Effect:
because, because of, caused by, respectively, as a result, for this reason, consequently, therefore, thus, this is why, due to

Summary and Conclusion:
as a result, in accordance with the aforementioned facts, ultimately, in view of the factors mentioned

Example:
for instance, for example, to illustrate, as it can be seen by, in other words, namely, specifically, according to

The following examples demonstrate transitions between the last sentence of a paragraph to the first sentence of a new paragraph. The keywords are bolded: 1) ...
Adding "Charlie had too much to eat when he visited Disneyland on his summer vacation. In the same way, he devoured his homework wh...