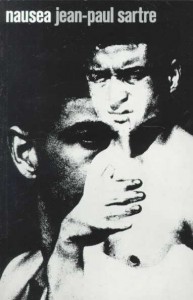 In his famous novel, Nausea, published in 1938, Jean-Paul Sartre tells a story of a 30-year-old historian, Antoine Roquentin, who lives in the town of Bouville. The main occupation of Roquentin is writing a biography of Marquis de Rollebon. At first, Roquentin literally falls in love with de Rollebon, and worked with enthusiasm, but then his mind changes. Events start to develop when, in 1932, Roquentin experiences a weird feeling that he cannot explain at first. All of the sudden, what he looks at seems to be living their own lives—they are intrusive and disgusting. Everything around him, so trivial and usual for others, seems to possess some kind of threat to Antoine. He describes this feeling as Nausea, and this is not a metaphor, but a concrete physiological sensation of an inner disturbance (Planter 535).

According to Sartre, it is the human being who defines the essence of what surrounds them (Satre 224). Being precedes essence. Stated succinctly, every day, we deal with an incomprehensible and unknown existence, granting names to its various forms and, thus, forming our perception of reality. This can be illustrated in a moment from the novel, when Antoine is sitting in a bar. He looks at the barman’s suspenders, which are purple. But, suddenly, it seems to Roquentin that the suspenders are blue in some places, and it pushes him towards the thought that “purple” is only a word, which was invented for convenience to define that which has no name. Roquentin writes in his diary: “The Nausea is not inside me; I feel it out there in the wall, in the suspenders, everywhere around me. It makes itself one with the café; I am the one who is within it” (Satre 126).

Antoine Roquentin faces Nausea everywhere—even in his favorite cafe. He cannot run away or hide from it. When Nausea seizes him, he is almost always alone, but this does not mean that Sartre equates the disease with loneliness. The reason, most probably, lies in the fact that the main character of Nausea is not connected to anything in this world, and has no responsibilities. “I have only my body. A man entirely alone, with his lonely body, cannot indulge in memories; they pass through him. I shouldn’t complain; all I wanted was to be free (Satre 56)” Thus, we may say Roquentin’s tragedy is not about a physiological feeling, but about the loss of freedom. “I am no longer free; I can no longer do what I will,” he says (Satre 167).

The fact is that, according to Sartre, human beings are free to do whatever they will, and this is the responsibility that limits one’s spontaneous freedom (Satre 564). People are mostly afraid, both of such freedom, and of the responsibilities it brings; so they often deny them. Roquentin is mistaken; he is free, but he is free for nothing. “I have no troubles, I have money like a capitalist, no boss, no wife, no children; I exist, that’s all,” Roquentin says (Satre 456). Because of the absence of responsibilities and social connections—with relatives, friends, with anything else—he is more sensitive to the bare world around him, and the Nausea is a reaction of his essence on the outer chaos. To get rid of it, Roquentin does not have to break his loneliness; he needs to find a reason, a justification for his existence.

Finding a justification for his existence is extremely difficult, if not impossible in his condition bearing in mind that his pain intensifies with reflections. He claims that, “Mankind, instead of being the central figure on the stage of reality, the rational creature for whom the non-rational world exists, is actually an accident; a late and adventitious newcomer whose life is governed by contingency” (Satre 28) Instead of taking responsibility for his own life, Roquentin prefers to believe his life is run by contingency, and that the only possible role for him is to be a “critical observer.” While being free, he does not feel free. Instead of defining the essence of his existence, he delves into himself in an attempt to run away from reality (Planter 235).

Antoine Roquentin had found a solution to his problem in creation. A couple of days before, he had a conversation with Anny, a woman with whom he was in love with several years ago. She shared her vision of “perfect moments” with him. The key point of her theory was that every human being had a situation in the past that makes them happy in the present. A number of such situations together form a story that can be replayed, over and over again, to recall passions contained in it. After Anny left, Roquentin went to the cafe where he had heard his favorite song. Suddenly, he understood everything. Anny’s theory of “perfect moments” gave him a key. If he wanted to see sense in his existence, in the future, he should create something in the present so that he would have something worth recalling in the past.

He decided to write a new book; not a biography, but a novel that would make people think of his life. Not resurrecting Marquis de Rollebon, but resurrecting himself. He wrote in his diary: “I must leave; I am vacillating. I dare not make a decision. If I were sure I had talent. . . . But I have never, never written anything of that sort. Historical articles, yes; lots of them. A book, a novel. And there would be people who would read this book and say: “Antoine Roquentin wrote it, a red-headed man who hung around cafes”; and they would think about my life as I think about the Negress’—as something precious and almost legendary” (Satre 101). This would justify his existence in his own eyes.