Causes of Having a Bad Mood 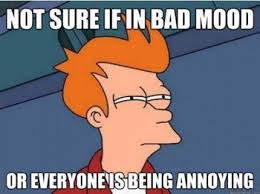 If you ask someone if they would rather be in a good or in a bad mood, this person will most likely think you are weird. The majority of people obviously prefer to feel good and to be in a good mood; this is a natural desire around which the entertainment, pharmaceutical, and other industries were built. Whenever you feel down, you can find a way to increase your mood; this is effective, but not a long-lasting measure; unfortunately, rarely people seek to find and understand the reasons causing their bad mood. Knowing these reasons, people would be able to maintain and control their emotions better.

Surprisingly, one of the most significant causes is what psychologists refer to as ego depletion. This idea belongs to the researcher Roy Baumeister, who believes that when people use their willpower, it drains their cognitive resources, and makes them feel worse. The more a person strives to abstain from doing something, the more annoyed their mind becomes. There is a stress threshold: at some point, when one’s willpower depletes, accumulated frustration manifests itself as anger, irritability, cynicism, and other negative emotions. In its turn, these effects increase a person’s blood pressure, as well as the levels of the stress hormone cortisol, which eventually gets a person even more flustered (Lifehacker).

A more trivial but not a less important reason why you might be in a bad mood regularly or even all the time is stress caused by excessive work; being a workaholic may be beneficial for your career and reputation, but it takes its toll: you put yourself at the risk of burning out. Energy you have is a depletable resource, and learning how to manage it properly is the best way to avoid fatigue and the bad mood caused by it. There are other causes that add up to fatigue (and can be connected to working all the time): the lack of vitamins from fresh vegetables and fruit. Many people nowadays have to eat on the go, having no time to have proper, balanced meals. Consuming food should be a relaxing and pleasant process—not only stuffing one’s stomach with calories. And after all, if you have not been in direct sunlight for a while, you are guaranteed to be in a bad mood (Huffington Post).

Unfortunately, among all the ways to get rid of excessive stress and bad mood, many people choose the easiest ones; some of them are more or less socially acceptable: playing video games, for example, or going to dancing clubs, and so on. However, more often people seek respite in substances such as alcohol or light drugs. Beer, all kinds of cocktails, wines, liquors, and other sorts of drinks are considered to be an easy and legal way to relax. The same refers to marijuana—since it is being legalized widely and is not considered to be a heavy drug, people smoke it to get in a better mood. However, numerous research studies prove the opposite: consuming substances like alcohol or drugs may make you feel better for a short time, but then there is necessarily a hangover, a feeling of guilt, temporary memory loss, and so on. Moreover, consuming such substances has numerous negative long-term effects (for example, mental degradation and/or addiction)—so in this perspective, these substances only make you feel worse (QuickAndDirtyTips).

So, the next time you feel your mood goes down, spend a minute to analyze your recent activities in an attempt to figure out what might be wrong. Activities that lead to the depletion of cognitive resources, fatigue and overworking, the lack of vitamins and sunlight, as well as the consumption of alcohol and other drugs can be factors you might want to eliminate in order to start feeling better.