Cause of Lung Cancer 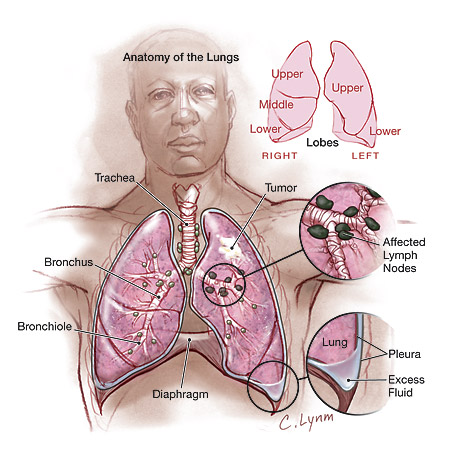 Among terminal diseases humanity has not yet learned to treat, cancer is probably one of the most feared illnesses. Unlike AIDS or other diseases widely spread in countries with low standards of living, cancer’s geography is much wider, including both rich and poor countries equally. Among the variety of different types of cancer, one of the most common is lung cancer; the environment in which people live in the 21st century greatly contributes to the development of this type of cancer.

The first and the most popular cause of lung cancer is smoking cigarettes. By numerous estimates, smoking cigarettes causes approximately 86% of lung cancer cases, including cases caused by passive exposure to smoke exhaled by other smokers. These chances increase if a person started smoking tobacco at a young age. Passive smoking poses a lesser threat, but is still dangerous—it is known that passive smokers (who are usually exposed to smoke at work or at home) have a 25% higher risk of lung cancer compared to people who are not exposed to the smoke of cigarettes. Regular heavy exposure to environmental tobacco smoke can increase the risk of lung cancer by 50% (CancerResearch UK).

Genetics and lung diseases in one’s genetics can also become significant risk factors of lung cancer. For example, if a person’s mother, father, sibling, aunt, uncle, or grandparent has had lung cancer, the chances of this person developing lung cancer slightly increases. At the same time, it has not been yet researched whether genes indeed increase cancer chances, or they increase individuals’ susceptibility to this disease. As for lung diseases, some of them are known to affect the chances of cancer development. In particular, among such diseases are tuberculosis and chronic obstructive pulmonary disease. Other illnesses like chronic bronchitis and emphysema can cause scarring in the lungs, which means the increase of the amount of tissue in them—and as it is known, cancer is an uncontrolled division of cells, and the respective multiplication of tissues (Healthline).

As for other environmental factors, one of the most significant among them is the exposure to asbestos fibers and similar materials. Usually, a person is exposed to these silicate materials at the workplace: technical works, such as thermal and acoustic insulation, involve the usage of asbestos. Nowadays, asbestos is limited or even prohibited from usage, since it has been proven that asbestos materials can cause both lung cancer and mesothelioma (cancer of the lungs’ pleura, as well as cancer of peritoneum—a lining of the abdominal cavity). Even non-smoking asbestos workers have a five times higher risk of developing lung cancer; as for the smoking asbestos workers, their chances to get cancer are up to ninety-fold greater than nonsmokers (MedicineNet.com).

As it can be seen, lung cancer does not develop on its own, but is triggered by a number of factors. The first and foremost of them is smoking tobacco, both active and passive. Exposure to asbestos materials also increases a person’s chances to get lung cancer. Also, genetics and past lung illnesses can lead to the development of this type of cancer. The cure for lung cancer is not finalized, and remains an epidemic.