After the global economic crisis of 2008, many people around the globe faced one of the worst social phenomenons: poverty. In the United States alone, the number of poor people in 2012 increased up to 46.5 million (Reuters). In developing countries, the situation had become even worse. Poverty does not mean that a person has little money to afford goods they want to purchase, or to maintain a stable quality of life; rather often poverty is absolute, which means that one literally has no livelihood. But what factors usually stand behind such dramatic impacts of poverty around the world, except the aforementioned economic crisis? 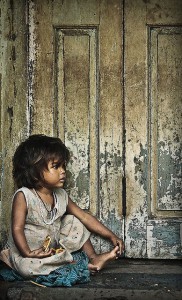 Poverty rates are greatly influenced by overpopulation. Overpopulation is a situation of a large number of people residing in a territory that is extremely limited in space and resources. Developing countries often face the problem of overpopulation; except the unequal distribution of resources and the lack of space, they usually have high birth rates, and low agricultural productivity. For example, Bangladesh has the highest population density in the world—2,970 persons per square mile. The dominating majority of them are engaged in low-productivity farming and manual labor, which causes extremely high levels of poverty in this country (Poverty at Large).

Another factor standing behind the increased poverty rates increase is unemployment. This problem has become one of the most urgent after 2008. In 2009 through 2010, about 42% of all families in Great Britain alone had no working members (Children Poverty Action Group). The job markets cannot offer enough jobs that would correspond with the skills of unemployed people. Besides, because of poverty, many people are willing to get any job for any payment; thus, they decrease the overall wages in those spheres that they start working at. In other words, the cheapening of labor and the working force takes place. There is no need to tell that low-wage jobs and part-time jobs are nothing else but poverty traps.

One more reason is significant demographic shifts. For example, in the United States a number of single-member families is traditionally high, and has been increasing; because one parent has less opportunities to ensure an adequate standard of living both for their children and for themselves, single-parent families are traditionally poorer then normal. Besides, poor people often share a belief that it is the social institutions to blame for their poverty, or that they can never make it out of their low income; therefore, they create psychological backgrounds for their financial condition.

Poverty is not a new social phenomenon. It has existed as long as the humankind has been around. But, until 2008, it was more typical for developing countries, whereas after the global economy crisis, even the developed post-industrial countries experienced it. Among the reasons for poverty the most obvious are overpopulation, unemployment, and demographic shifts together with psychological premises.