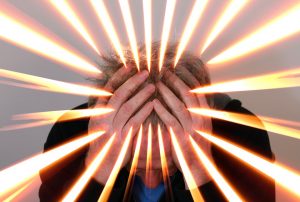 Modern psychology leans towards believing that maturing is a continuous process which can last one’s entire life, rather than a single moment of psychological “initiation,” after which a person realizes that he or she has become an adult. Respectively, challenges we have to deal with almost always correspond with the stage of psychological development we are currently in. Problems we go through as teenagers at high school and those we face as grown-up individuals differ in nature and complexity, although our emotional response mechanisms remain the same: in difficult situations, our bodies react with stress.

Being stressed is normal, usually. In fact, stress is not necessarily a negative feeling, but rather a condition in which we find ourselves during or after periods of emotional and/or physical loads. In other words, even positive factors such as marriage or graduation can be stressful. Normally, after a stressful factor is eliminated, our psyche goes back to its normal condition. However, if a person was exposed to a series of stressful events, or remained under stress for a long period of time, it may become not so easy to get rid of it.

In fact, psychologists distinguish between three main kinds of stress: acute, episodic, and chronic (Psychologist World). Acute stress is a result of short-term yet traumatic events—for example, a car accident, a conflict with a friend or relative, witnessing or falling victim to violence, and so on. Episodic stress is what we all go through on an everyday basis: short-term situations we have to deal with every day, and which have become almost habitual. For instance, getting stuck in a traffic jam and being late for work, or having a deadline at work, or paying taxes—these are some examples of episodic stressful events which can affect us negatively, but which are bearable and manageable. And finally, chronic stress is a result of processes that occur in our lives, and the effects of which are prolonged in time as well. Perhaps the best example of a situation causing chronic stress is an unhappy marriage, when both a wife and a husband suffer, but have no courage to get divorced.

Naturally, emotional sensitivity varies in each individual, so the same events can cause different emotional responses in people. What is a mundane morning ride to work for one person can be daily hell for another one; one spouse may be content with his or her marriage, while the other one can feel trapped and unable to go on with the relationship any longer. At the same time, there are stress factors that tend to cause negative emotions of approximately the same intensity in almost everyone.

According to the Holmes-Raye Social Readjustment Rating Scale, one of the most emotionally-crippling factors of stress is the death of a loved one (LiveStrong.com). The situation gets worse if spouses had common business or debts, so after the death of one of them, another one has to take full responsibility of chores. However, it is not only a spouse whose death can cause intense stress: the death of a parent, a child, a friend, or a significant other can cause intense emotional pain as well. As the time goes, the pain will become less acute, but the psyche will take vast amounts of time to recover—this is a natural part of the process of grieving, so little can be done about it.

Similarly to the loss of a loved one, divorce is another factor of stress that affects the majority of people with similar strength. Unlike dating, divorce implies not just two people breaking up and starting to live separately, but also a number of legal consequences which need to be attended to. Divorce usually means moving to a different place, learning to live a single life, sharing custody over children, dividing property, breaking previously-established social connections, and so on. This is a huge change in the life of any individual, and even if spouses hated each other and the divorce was their first step towards a long-anticipated peaceful life, judicial and legal matters following a divorce can cause huge amounts of stress.

Financial worries can be a powerful stress factor as well. We live in a world where a huge part of information perceived by every individual is advertising certain goods and services. The number of material temptations is overwhelming, and financial systems support ubiquitous consumption via loans, crediting policies, etc. From one angle, this increases the standards of living, and makes people’s lives more comfortable, and goods more accessible. On the other hand, having to pay numerous bills, loans, credits, calculating incomes and expenses, financially supporting other people, and so on, is known to cause immense stress (Psychologist World). Financial worries are not something rich people are free of: in fact, just as in case with divorce and death, financial problems can become a huge strain in the life of every individual, regardless of their incomes.

Psychological stress is a normal part of living. While some people tend to be more emotional than others, there are stress factors that can affect almost everyone, regardless of their sensitivity. Among the most powerful ones are the death of a loved one, divorce, and worries related to finance and money. No matter what the reason is, it is important to learn how to manage stress in order to not let it become chronic and overwhelming.

Waude, Adam. “10 Sources Of Stress (and How To Avoid Them).” Psychologist World, 4 Apr. 2016, www.psychologistworld.com/stress/ten-causes-of-stress-how-to-avoid-them.