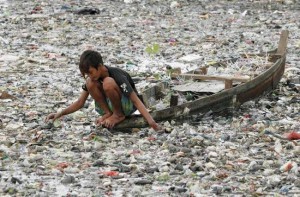 Industrial development and production in western first-world countries has long ago reached the level where it is possible to dramatically affect the environment. Among such industry-related problems as air pollution, soil contamination, radioactive waste, and so on, the problem of low-quality water stands as one of the most pertinent in terms of its importance for the survival of humankind. Therefore, information about the negative effects of water pollution should be not only studied, but spread among the general populous, taken into consideration, and prevented.

One of the most significant problems connected to poor water quality is that entire food chains are drastically affected or even become extinct due to increased toxicity. Such pollutants as lead or cadmium get into water, and contaminate microorganisms living in it. These microorganisms are consumed by larger species—such as plankton—which, in their turn, are eaten by even larger animals, and so on. Eventually, this chain leads to human beings, because people all over the world consume fish and seafood. Thus, by polluting oceans, people worsen their overall well being (ESchoolToday).

Another problem connected to the contamination of water is the disruption of entire ecosystems. An ecosystem is the way of interaction between creatures that inhabit a certain area, and thus depend on each other. But, water pollution can severely damage the subtle connections between the living species inhabiting certain environmental areas (ESchoolToday). This, in its turn, leads to an increasing imbalance in the environment, causing species to become extinct; every time an ecosystem suffers, it also affects the condition of our planet in general, and thus, people living on it.

Perhaps the most significant damage from water pollution is connected to humans. For instance, diseases like hepatitis are caused by eating contaminated seafood; developing countries, which often have problems with the quality of water, experience frequent outbreaks of cholera or diphtheria. If you swim in polluted water, it can cause you to develop skin diseases, reproductive problems, typhoid fever, and so on. Moreover, sometimes it can cause heavy metals or pesticide poisoning, because polluted water often contains mercury, plumbum, insecticide, herbicides, and so on (TutorVista.com).

As it can be seen, water pollution leads to a number of serious, negative consequences. It destroys animal species that inhabit seas and oceans, and disrupts existing food chains. Water pollution also affects ecosystems in a negative way, destroying them and thus affecting the ecological situation on Earth. These two factors have an indirect, but strong effect on humanity. As for the direct effects, polluted water causes people to suffer from cholera, diphtheria, skin diseases, reproductive problems, poisoning, and so on. All of this means that humanity should pay attention to the problem of water contamination, otherwise it will continue to severely hurt itself.