The Consequences of World War II 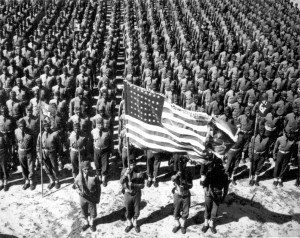 World War II can be rightly called one of the most significant events in the history of humanity. It had a significant impact on the development of the entire world, and resulted in the revision of many socio-political doctrines, policies, and principles of international relations.

World War II had many consequences. The USSR lost over 24 million people, both military and civilians, and over 21 million people were left homeless and in poor conditions (Fussell 745). Great Britain and France had both collapsed as empires, and European boundaries had been literally redrawn. The United States of America claimed to lead the reconstruction efforts and started to conduct policy, directed to establishing itself as a new superpower. Thus, modern geopolitical balance of power in the world can also be considered as one of the direct consequences of World War II. Among many others, several consequences of this war are felt even today, such as the increase in baby boomers in the U.S., which has a continued effect on the economy; cold wars and war sensitivity, including the nuclear arms race today; and the establishment of the U.S. as a leading power in the world.

Between the years 1946 and 1964, a sudden and large increase in birthrate was detected in the U.S. The reason for such a dramatic growth in population is still a disputed subject among experts. At first, the U.S. welcomed this phenomenon by passing GI bills to improve education, skills and income. Now, the generation of baby boomers is already retiring, or fast approaching retirement age. Currently, the cost of Social Security is rising faster than the taxed income of the working population (Lavery 56). Due to this fact, nowadays, it has become questionable whether the American economy will be able to afford the future cost of Social Security, as the baby boomer generation continues to retire.

Another consequence of World War II is the continuing Cold War. One might say that it had ended several decades ago, but actually, it still goes on, though now it is not so intense (Lavery 76). Nation states spend billions of dollars to increase military power. Nuclear weapons today have become the weapons of choice. Diplomacy, combined with a demonstration of military power, is often used to pressure leaders who conduct policies which are different from those which the world’s superpowers consider desirable. Wars continue to influence domestic policies and define the full meaning of conflicts.

World War II hit the U.S. economy—the expenditure on military action approximated over 95 million dollars. After it ended, the United States established itself as a superpower and assumed the leading role in post-war reconstruction (Lavery 86). Today, the United States continues to play the role of global benefactor, whether or not their help is required, interfering in domestic policies of a number of states and nations. This results in many government leaders resenting U.S. policy and its superpower status.

After World War II, international conflicts have been perceived differently. A century ago, a war was mostly a local event, concerning only its direct participants (Fussell 87). Now, a war is a process which involves multiple sides, and has consequences which are often difficult to predict. Nuclear arms seem to be the weapon of choice, and nations often feel empowered by displaying their arms for the entire world to see. To promote peace and understanding among nations, a special organization, the United Nations, was established.

The world continues to feel the consequential tremors of World War II through financial and economic woes. Among the most obvious consequences of this war, one can point out an effect of the baby boomers generation on the economy of the U.S., cold wars, nuclear weapon races, and the establishment of the U.S. as a leading power in the world.