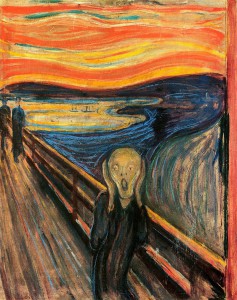 Visual art as we know it today is completely different from what had been created before the 20th century. Realistic depictions of the surrounding reality has given up its place in favor of attempts to convey the artist’s inner world directly through the diversity of shapes, colors, and means of visual depiction. Hence, a reasonable question arises: how should one evaluate pieces of modern art given that traditional criteria of assessment do not apply easily in this case? Unlike traditional art, where one can make judgments about the scene, an artist’s skills, and composition, modern art should be evaluated in a slightly different manner.

Even though there are numerous artistic laws and rules, any assessment made about a piece of art remains subjective; I believe one can easily explain why someone likes a particular piece of art, but will not be able to persuade those who disagree with them or have no artistic taste. Considering this, let us refer to “Scream”—a famous painting by Edward Munch. Though it was painted more than 110 years ago, it still makes a perfect example of modern art. Personally, I usually evaluate paintings by their lucidity, strength of artistic means (such as composition, coloring, and so on), and the creator’s ability to communicate with the audience through a canvas.

Despite its expressionistic, distorted shapes and disturbing colors (which will be discussed later) “Scream” is still a realistic painting, performed in an expressionist manner. Its scene contains no abstract symbols or figures; its elements are clearly visible and do not require interpreting, which proves that the painting is realistic. Hence, in terms of comprehension, Munch’s “Scream” can be relatively easily perceived by all people, and thus is open for reasoned debates about its artistic value. It is good for any piece of art, as people should be able to discuss what they perceive; for example, in the case of “The Black Square” by Malevich (which is also a significant and symbolic painting) it is much more difficult for people to understand the artistic value of what they are shown (RealArtsHistory).

By his painting, Munch completely fulfilled the idea of expressionism: conveying the feelings through the canvas. Compositional means used by the artist create a feeling that a figure in the center is pierced and oppressed by the surrounding nature, and at the same time, the scenery looks unstable; intersecting diagonal lines of the bridge and the river, as well as the impending skies, create tension; right in its center, a figure screaming in horror looks crushed by the power of nature and uncertainty; even despite that the figure is not alone (the two people standing nearby) the painting is soaked with the feeling of despair and loneliness: due to the use of a slightly distorted perspective, Munch created an unbridgeable distance between the central figure and people who witness this artwork. These impressions are powered by disturbing colors used by the artist, and curvy lines that make the scene look like a delusion. The picture definitely affects anybody who looks at it.

“Scream” was created in a manner that was typical for Edward Munch, though some features in this painting were exaggerated. Thin dark figures with sunken eyes, disturbing dim colors, the sensation of loneliness, generalized scenery—these were Munch’s regular artistic techniques, and all of them were embodied in “Scream.” Thus, this painting can be called a complete embodiment of Munch’s creative method; this method, however, was inspired by Munch’s severe psychological disorders. The artist suffered from manic-depressive psychosis, and his paintings are a testament to his psychological condition and show people how deep his sufferings were (AllBios).

“Scream” by Edward Munch is a perfect example of modern art. Though it had been painted almost a century ago, it still remains modern, both because of the universal character of existential problems raised by it, and by the artistic means used. Munch created an emotionally influential, powerful piece of art; the artistic means he used completely convey the feelings of despair and loneliness, and all of Munch’s tragic personality seems to be expressed in this painting.