The Ethical Value of Political Correctness 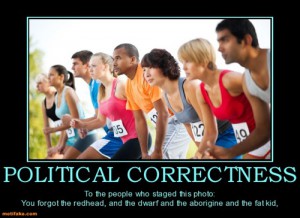 In 1948, a renowned British journalist, George Orwell, wrote his famous novel 1984, in which he described a totalitarian society where people had no freedom to express their thoughts without fear. In this novel, the government, in order to limit citizens’ capacity of thinking about censored topics, invented a new language, Newspeak, which widely used euphemisms for omitting prohibited words. In Newspeak, many words were simply excluded, because if there was no word to determine a crime, then the crime itself could not be committed. This strongly correlates to the modern phenomena of political correctness, which has a similar approach and ethical value.

The concept of political correctness seems ridiculous and ineffective due to the aggregate of several factors. The first of them is that expressions meant to omit an “uncomfortable” topic still directly point at it. For example, if you call a blind individual “a person with sight disorders” it will still point to their blindness, and possess the same meaning – the inability to see. By calling someone “African American” when they are not from Africa, you are trying not to say “black,” thus giving off the impression that you feel the word “black” is an insulting word worth avoiding, which in turn makes it insulting because you appear like you think it is (GeekoSystem). Thus, by this criteria, political correctness fails to prove its efficiency.

The inefficiency of political correctness becomes even more obvious when it comes to words and phrases which are assessed as potentially insulting. In 2012, the New York City Department of Education published a list of 50 words that can be considered insulting (CBS New York). It is not clear how such words and expressions as, for instance, dinosaur, birthday, divorce, computers in the home, homes with swimming pools, politics, religion, or television and video games can offend other people. If authorities think the word “divorce” insults a child whose parents had separated, than they should consider that the word “marriage” can be insulting for these children as well. According to this logic, too many potentially insulting phrases must be prohibited from use, which is far from rational.

Politically correct language limits communication and impoverishes language, as it is not natural. People constantly have to mind what they say in fear of getting sued or physically harmed, which leads to increasing stress. In its turn, stress causes people to become less aware and more irritated, which can result in an already calculated insult. People are responsible only for their own words and reactions; to some extent, we must be aware of what we say to others, but we must not predict and guess the reactions of our interlocutors to the words we use all the time. Therefore, it is natural when people use direct words instead of “politically correct” substitutes. One can never truly know when they insult another person; it is impossible to be nice and pleasant to everyone in respect to the words we employ; thus, trying to comfort everyone by intentionally substituting necessary and habitual words is a wasted labor.