“The Shining” by Stanley Kubrick 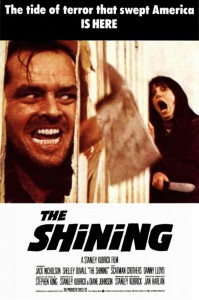 One of the most ambiguous movies shot by Stanley Kubrick is “The Shining”—a horror film, that tells a story of a family that has moved into a hotel called the Overlook, which was inhabited by ghosts. Throughout the film, the plot develops around the Torrance family: Jack, Wendy, and their son Danny. Kubrick based the film on a novel written by Steven King of the same name. The literary source is rather thrilling and intriguing, and the film can basically be given the same positive assessment.

According to the screenplay, Jack Torrance, a writer who had quit abusing alcohol, moves into a distant hotel in the mountains with his family. The winter weather conditions render the hotel fully isolated from the outer world. All roads leading to it are covered with snow, so no vehicles can pass. During this period, the hotel is closed. Isolation, however, is what Jack needs to write his new novel, and at the same time, he will work as the hotel’s keeper. The hotel was built on a patch of land where an old Indian cemetery was located. During the film, Jack Torrance (Jack Nicolson), influenced by the evil spirits, gradually goes insane and attempts to kill his wife Wendy (Shelley Duvall) and son Danny (Danny Lloyd), but fails to do so and dies.

The first and foremost criterion to evaluate “The Shining” is the atmosphere that was reproduced in the film. Kubrick managed to convey a sense of isolation and detachment, as well as the supernatural fear constantly increasing throughout the film. Despite the luxurious furnishing, the Overlook hotel looks like a cemetery. The tension is also delivered through scenes with ghosts and the depictions of how Jack gradually loses his mind. One of the most horrifying moments in the film is when Wendy takes a look at the manuscript Jack had been writing during the period of time their family spent in the hotel. She sees that all pages are scribbled with just one phrase: “All fun and no play makes Jack a dull boy,” and she then understands that her husband is completely insane. The sense of fear and desperation, which Kubrick intended to convey to the audience, is delivered masterfully, thus speaking in the film’s favor.

Then, speaking of the acting, with the exception of Jack Nicholson and Scatman Crothers, it is unfortunately unconvincing. While Jack Nicholson managed to create an image of a psychotic writer suffering from alcoholism, the other two members of the Torrance family, played by Shelley Duvall and Danny Lloyd, look stilted and simulated. In the case of Danny Lloyd, allowances can be made for him because of his age and lack of acting experience; however, Shelley Duvall in this particular movie is not at her best. In most action scenes, her play looks factitious, and sometimes inappropriate, which is irritating. This makes significant contrast to Nicholson’s character who is persuasive, such as in the scene when he breaks the bathroom door with a fire ax. This is, perhaps, one of the best scenes in the film.

The technical performance is also important for the film’s evaluation, and “The Shining” can be noted for a high level of cinematography. The film introduces a number of novelties that were never used before, or were used rarely. Almost all stills with Danny were shot from the growth rate of a small boy. This technique helps the audience feel the world of a child in a more realistic manner, and view the ghosts and the surrounding scary environment through his eyes. Also, during the filming, a Steadycam system was used. This technology allows for the stabilization of the picture in dynamic scenes. For example, the scene when Danny rides his bicycle in the hotel’s corridors was shot with the help of this device.

“The Shining” is an excellent horror movie, made by a renowned director, based on a famous writer’s novel. It portrays a dense atmosphere of despair and isolation, which is valuable when portraying the plot. Technical novelties used during the filming also contribute to the positive assessment of the film. One of the most significant factors speaking in favor of “The Shining” is Jack Nicholson’s acting ability in portraying the image of a psychotic writer, who is convincing and genuinely scary. However, in his background, other personages are lost due to the characters played by Shelley Duvall and Danny Lloyd looking simulated.