Advantages and Limitations of Standardized Tests 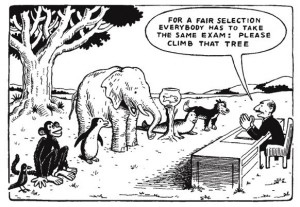 Standardized tests are a common and popular way to evaluate the academic achievements of students, teachers, and school districts. They are used in many areas, such as in the army, civil service, medicine, and so on, but primarily standardized tests are associated with academic performance. Many arguments in favor of the usage of these tests have been put forward, as well as a number against, since this method of monitoring and evaluating academic success has both benefits and drawbacks.

Standardized tests are most widely used in the field of education to assess the academic performance of students. Two commonly known types of standardized tests in the USA are the SAT and the ACT. The SAT evaluates skills in vocabulary and mathematics, while the ACT has more to do with a broader range of knowledge and includes additional subjects, such as science. Among the other most-known tests are the PSAT, National Achievement Tests, and SAT II examinations.

One of the main purposes of testing is to set a standard: a performance baseline of progress for all parties involved in the educational process—students, teachers, and school districts, and to hold them accountable for achieving it. The idea is to detect areas where students usually fail, or fall behind and promote improvement, not punish them (Strong 24). Besides, tests help remove bias some teachers may exhibit towards students and make the evaluation process more objective. This is usually achieved by using special automatic machines that score exams. Also, due to the usage of these methods, the potential of human error is decreased, or even eliminated.

On the other hand, the exploitation of the system of standardized testing is linked to a number of issues. Thus, many feel that tests do not provide accurate evaluations of a student’s knowledge and learning capabilities, particularly due to the fact that in order to pass a test, rote memorization is preferred to critical thinking and higher learning (Strong 254). Critics of standardized testing often claim it contributes to the rise of academic dishonesty, as the pursuit of knowledge becomes a pursuit of higher test scores. Besides, the emotional state of students may be destabilized due to test-taking. The environment, fostering constant competition and even rivalry may create excessive stress and test-anxiety. A person who gets a low test score may become discouraged from pursuing further academic success. Perhaps one of the most serious drawbacks of using standardized testing is connected to discrimination. Holding all schools and students to the same national standards may infringe on the rights of students with disabilities, lower socio-economic statuses, those who learn English as a second language, students of different nationalities, and so on.

One can see that standardized testing is a universal method of evaluating those skills to which tests are targeted, which aim to reduce or even excludes bias, partiality, or the potential of human error. Standardized tests are meant to set a high standard and promote objectivity. However, this method is not perfect and involves a number of issues. The most critical among them are the preference accorded to memorization over critical and analytic thinking; the encouragement of academic dishonesty; infringing on students’ emotional state, and even some elements of discrimination. Evaluating both sides of the argument allows for improvements to be made, while still encouraging students to strive for the highest academic achievement.