Great Expectations
Charles Dickens published the novel Great Expectations in weekly volumes of his All the Year Round periodical throughout 1860 and 1861. The novel features an individual who goes by the name Pip; the author follows the life of the protagonist from his early childhood years until his mature years. 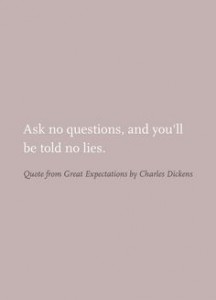 The primary theme of the book is Pip’s personal growth and development throughout his life, as he struggles through poverty, loneliness, unrequited love, then wealthy idleness, aimless prosperity and finally, learns to see beyond the cover of the material world. Through tough life patches, one after the other, with one expectation demolished after another lost hope, Pip finds that he and his desires revolutionize tremendously.

The novel follows the series of Dickens’ later prose, in which the author criticizes the idle lifestyle of rich gentlemen, whom he contrasts with common working people, who seem to have a much better understanding of the purpose of life, after all, than the wealthy, righteous city folk, and succeed in finding happiness. Dickens sharpens his societal criticism with the use of various literary techniques. The one that I find particularly interesting in the novel is foreshadowing. Foreshadowing—the technique of obliquely referring to a number of incidents long before they are completely revealed—is among the vital stylistic tools the author employs to symbolize the time and plot development of the novel. It also creates a peculiar feeling of anticipation in the more attentive readers, who try to link the scattered pieces and author’s hints together into one logical unit, before the author does it in the story. I personally find such activity to be incredibly engaging, and it fascinates me how Dickens employs this technique so naturally throughout his writing. I believe it was that much more difficult considering that the novel was published in parts on a weekly basis. Such foreshadowing was also a perfect way to keep the readers intrigued until the next week’s publication.

The author heavily relies on foreshadowing principles when narrating in the first person. This provides an insight into acquaintances for the person reading it prior to the scene’s execution. Dickens also manages to skillfully bring back the same plot figures whom he once introduced in subsequent and unexpected situations. This technique aids the author in creating an atmosphere of apprehension as the reader continues to follow Pip’s life story with an expectation of receiving the entire knowledge in the subsequent pages. This makes the plot all the more intriguing and entertaining for the reader.

Among other philosophies, the novel teaches us about the consequences of our actions, even if they happened long ago and we seem to have forgotten about them. The novel begins with a seemingly unimportant incident when Pip is still a little boy and makes a new acquaintance by doing an altruistic deed. But this acquaintance will change during Pip’s life in the most unexpected of ways. What does Dickens attempt to teach us with such an example? I believe it is the idea of being virtuous every minute of your life, not just when you think it can, in one way or another, helps you achieve your aims. Just as Pip becomes wiser and more profound as life throws him into one puddle after another, the reader too gains all the same invaluable lessons by following Pip’s story and empathizing with the protagonist.

Personally, I enjoyed the novel and read it cover-to-cover in one evening, unable to take a break from the incredibly dramatic and, at the same time, so appealingly humane story. Despite the fact that Pip’s life story is the center of attention throughout the novel, it is not just his expectations that are broken, then evolve into unexpectedly refreshing hopes. It is also the expectations of Miss Havisham, Estella, Magwitch, and Herbert Pocket. What do these heroes’ bitter experiences teach us? Personally, they taught me to reconsider my life, to let go of past offences, because they only hold us down, to be honest with myself about what I want and what makes me happy without worrying about public opinion. I think every reader will find the story to be great tutoring material on the mistakes we do not have to make. Great Expectations is a book worth every minute you will spend reading it, as it can save you so much time you would otherwise waste making the mistakes that the heroes of the novel already demonstrated for you.