The Calcutta Pococurante Society: Public and Private in India’s Age of Reform

This article [The Calcutta Pococurante Society: Public and Private in India’s Age of Reform] was originally published in The Public Domain Review [https://publicdomainreview.org/2016/08/17/the-calcutta-pococurante-society-public-and-private-in-indias-age-of-reform/] under a Creative Commons Attribution-ShareAlike 3.0. If you wish to reuse it please see: http://publicdomainreview.org/legal 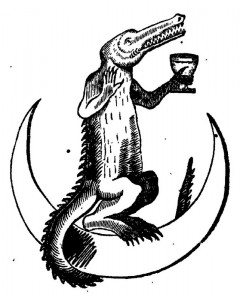 Lurking on the shelves of the Uttarpara Jayakrishna Public Library, in the Indian state of West Bengal, is a most unusual text. Prefixed to the Calcutta Quarterly Magazine for 1833, this sixty-page supplement bears the insignia pictured above and the title “Calcutta Pococurante Society.” It begins with some scraps of verse and a manifesto to “investigate and discuss the following subjects”:

Firstly: three courses and a des[s]ert.
Secondly: an additional course.
Thirdly: Cant, Humbug, and Absurdity in all their branches whether Tory, Whig, Radical, Ultra, or Liberal, Medical, or Literary, Martial, or Civil, National, or individual … (p. 3).
The proceedings which follow are a mixture of light humor, literary chatter, and armchair philosophy, all dripping with booze. “My dear compatriots and I,” one member sets the scene, “are scribbling in Calcutta, the ruling caste, and tippling our Hock and Champaigne round this table” (p. 22). Another notes “how much the art of preparing the necessaries of life has advanced in Calcutta,” referring specifically to “the modus operandi of cooling wines” (p. 33). Elsewhere, a full page is taken up by a wine list. Evidently, this is “a club where the mind can throw off its coat, and put its legs upon a chair if they are tired” (p. 7). The members’ wandering dinner chat, peppered with lines of poetry and elements of the occult, is not the kind of thing modern readers are used to seeing in print. Nor is it obvious why past readers should have wanted to.

Early nineteenth-century Calcutta (now Kolkata) has long held particular fascination for historians. In older tellings, this was the setting of a “Bengal Renaissance,” which saw ambitious attempts to synthesize eastern and western philosophical traditions, and gave an early (if abortive) impulse to Indian nationalism. Recent studies have situated Calcutta’s intellectual and political ferment in the larger context of a British-imperial or global age of reform. Bengal’s capital was the second city of Britain’s empire and a major commercial hub, home to a cosmopolitan population of some half a million. By the 1820s, Calcutta boasted meeting halls, a flourishing press, and numerous voluntary associations—not to mention collegiate institutions predating London University by up to a quarter-century. For many contemporaries, these were signs of an emergent “public” analogous to that which had come to shape social and political life in Britain. 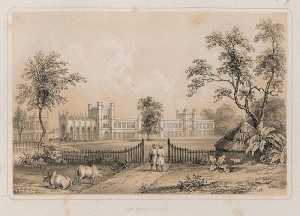 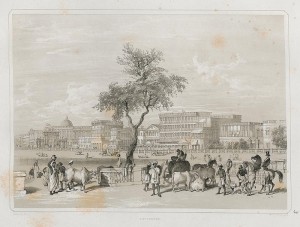 A view of the “Esplanade,” from Charles D’Oyly’s Views of Calcutta and its Environs (1848).

Yet the situation of Calcutta’s “public” differed markedly from that of its metropolitan counterpart. Its very claim to the title was denied by the government, on the theory that acknowledgment would lay the ground for revolution. As “public opinion” acquired ever-greater status in Britain, it remained highly contested in British India. Assemblies and the press were tightly regulated for much of the period, and newspaper editors who ran afoul of the authorities faced sanction or embarkation. Even at its most inclusive, meanwhile, Calcutta’s would-be public retained sharp divisions. Indian and European reformers came together around certain political questions, notably freedom of the press, but it was not at all clear that they shared the same long-term interests. The European population comprised mainly officials in the East India Company’s civil or military service, few of whom had any intention of settling permanently in India. While some immersed themselves in local culture and society, a greater number clung determinedly to the comforts of home. And while calls for responsible government resonated from the 1810s–30s, it was uncertain how far the city’s European population would pursue them if it meant relinquishing cherished privileges and emoluments. To this color divide might be added others running along lines of caste, class, and religion. It was thus a matter for debate among contemporaries—and has remained so among historians—whether a “public” on the British model existed in Calcutta, and, if so, how far it penetrated indigenous society. Could “public” institutions take root on Indian soil?

A point of entry to such questions can be found in the aforementioned proceedings of the fictional “Calcutta Pococurante Society.” According to its rules, the Society is dedicated to “Cant, Humbug, and Absurdity” in their “public” branches; “private Cant and private Humbug” are avowedly off limits (p. 3). Yet notions of public and private, openness and closedness, are played with and blurred throughout the text. “Public Dinner,” one member declares, is a misnomer: at such events, “A wise man dines before hand, and goes to make speeches or gain ‘his private end’ out of the public” (p. 30). The Society’s constitution marks another exercise in parsing such distinctions. “The number of members,” one rule states, will “be strictly limited to such as apply for admission, or are asked to join the Society or who are neither asked to join [n]or apply for admission” (p. 4). While the group would thus by comic implication seem open to all, another rule provides “that a Secret Committee be appointed … to eat, drink and think for the rest” (p. 4). As one member puts it, “Perhaps the public would like to eat drink and think for itself—but this would never do… We must be particular as to whom we admit into our circle or it will not long be worth entering” (p. 7). Such exclusivity is reinforced by the cultlike forms and observances of the Society, notably its alligator insignia, whose “mysterious meaning” is reserved for the Committee members: Zegri De Rohan, Glengyle, Wilfred, Lincoln, Berkeley, and Candide (p. 4).

Annotations in the Uttarpara Library’s copy of the text dispel some of the mist surrounding this upper echelon. On page four, next to the printed handles of the Secret Committee members, someone has scrawled the names of prominent figures in Calcutta’s European community. “Wilfred,” for instance, is identified as David Lester Richardson, a writer and editor of publications including the Calcutta Quarterly. Also identified are the lawyer Theodore Dickens, the merchant William Cobb Hurry, and the administrator Henry Meredith Parker. Assuming the identifications are accurate, these were “public” eminences, whose depiction as soused aesthetes lends the “Pococurante” text the character of an extended joke. To be in on the joke, however, would have required a fairly intimate knowledge of the real-life personalities involved. That a work with so apparently narrow an audience could have found its way into print thus suggests something of the clubby parochialism of Calcutta’s would-be public. In a sober moment, Hurry’s character describes the British in India as “a limited society, where every body almost is personally known to every body else” (p. 54). Elsewhere, Parker’s stand-in opts to recite a piece formerly intended for the press, “as this circle is sufficiently extensive in its ramifications to supersede all necessity of publication” (p. 34). If Calcutta reformers had long envisioned the press as a conduit to the wider world, the proliferation of the medium seems instead to have fixed the attention of the city’s European elite upon itself. With few “matters of engrossing general or public interest to occupy men’s minds,” they gossiped about acquaintances or reminisced about home (p. 54). 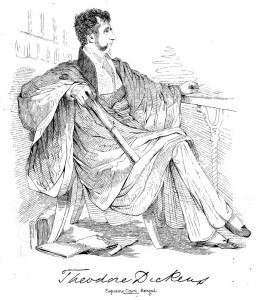 Lithographic print of Theodore Dickens, one of the identified members. From C. Grant’s Lithographic Sketches of the Public Characters of Calcutta (ca. 1850).

It is striking, meanwhile, how little the text is concerned with India or Indians. Most coeval groups, like the Calcutta School Society or Agricultural and Horticultural Society, included Bengali elites, and even English-language journals featured “native” contributors. The “Prefatory Remarks” which follow in the Calcutta Quarterly note “the rapid advance in knowledge, made by the Natives of India within these few years past,” and avow as one of the publication’s objects “to ameliorate the condition of the subject millions of this country.”1 Yet there is scant discussion among the pococuranti of these “subject millions.” The aloofness of the British transplants, their dislocation from their surroundings, seems part of the satire (“pococurante,” taken from a major character of Voltaire and a minor work of Thomas Moore, means “little-caring”). At the Society’s dinner, even local ingredients are rendered in French on the menu. The members discuss almost exclusively western politics, philosophy, and literature. On the rare occasions when the east enters the scene, it does so obliquely and fancifully, for instance in the decoration of the Society’s meeting-place: “a Turkish tent of white silk … Ottomans of pale Blue and Gold … a profusion of Purple Velvet drapery” (p. 5). The everyday experience of life in India is relegated to outside the tent-flaps.

Header of the Calcutta Quarterly with the Uttarpara Library’s stamp.

It is ironic that a document with so little to say to Indian readers should have been preserved in one of the first libraries freely open to them. The Uttarpara Library, just upriver from Calcutta, was founded by the wealthy reformer Jayakrishna Mukherjee in 1859. In its early days, this “remarkable institution” featured a reading room with thousands of works in Bengali and Sanskrit as well as English; upper rooms for meetings, lectures, and other town hall functions; and “a garden of choice fruits and flowers … for the resort and recreation of the community.”2 Conceived with the aim of widely diffusing knowledge, the library circulated volumes in the surrounding area and offered a gold medal to anyone who could pass an advanced reading examination. It embodied a far broader, more sanguine view of the Indian public than that found in the annals of the Pococurante Society. Historians have typically seen the early 1830s as the heyday, not to say the last gasp, of Calcutta’s early reform “public.” Yet works like the one explored here remind us just how small this “public,” for all of its aspirations, was. The Indian public imagined later in the century, built on popular, nationalist foundations, was a far cry indeed from one which could be summed up as a handful of alienated British transplants.

An inkling of the fragility and decadence of that early-modern formation runs throughout the “Pococurante” text. And in the final pages, a series of disasters befalls the Society. First, several members are seized by the poisonous effects of mushrooms consumed at dinner. Then Parker’s character observes, “Do mine eyes deceive me or does that Chandelier above our heads, and half a ton in weight, sway to and fro in the intrenchant and the slumbering air, as if’t were moved by some mighty but invisible hand?” (p. 58). Richardson’s character has just enough time to compose a sonnet “pro bono publico” before a final earthquake brings everything crashing down (p. 60).

Joshua Ehrlich is a PhD candidate in History at Harvard University, currently writing a dissertation on the East India Company and the politics of knowledge. He has published previously on intellectual history and the history of political thought in Europe and South Asia.