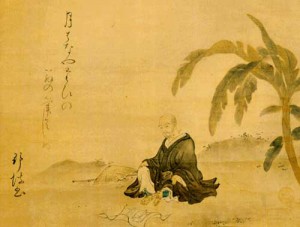 (Haiku is a Japanese style of poetry considered to be the smallest form of poetry in the world. Traditionally, it is written in 17 syllables, uses a seasonal reference, and employs the juxtaposition of two images to create an effect on the reader. Though nowadays the rules and principles are flexible, haiku still retains much of its meditative spirit.

Many practicing haiku poets, in the past and currently, go on spiritual walks or journeys to write their haiku. They wander around natural places, and even urban places, sometimes begging for food as a monk, sometimes not. They see it as a type of meditation—walking, witnessing nature, and writing poems that relate to their inner experience or what they experience outwardly.

So, why is writing haiku conducive for getting into a meditative state? It has much to do with the structure of haiku and its principles. Through a small amount of words, not even a complete sentence, a haiku tries to make the reader enter a state of awe, surprise, or introspection. It does this mainly through its juxtaposition of images, which by principle, should not be too obvious in connection or too disconnected so that the insight hypothetically given to the reader is not too difficult to receive.

Let’s look at an example of a haiku by Matsuo Basho, the most famous poet of the Edo period in Japan, and the person who took haiku (which was originally called “hokku” and was a part of a linked poem named renga) as a style of poetry of its own:

it is spring!
a hill without a name
in thin haze

When we read haiku, we imagine the scenes described and get an effect from it. The original intention of haiku was to get a reader into a Zen state, where no thoughts come and only awareness pervades.

Try to imagine the scene in which Basho writes about. See what state you get into. Hopefully, you get into a state of thoughtless awareness, despite the haiku being translated from Japanese and maybe some of its original charm being lost.

Basho was famous for his haiku principle of “lightness.” This principle has many meanings, but one idea that resonates with people who meditate is that reality is neither in a state of existence or nonexistence, and we cannot have any thoughts about it that comprise truth. Through his haiku, Basho tried to show this principle, and I think it is illustrated well in the aforementioned haiku.

In spring, everything is new. This hill he sees is without a name, like everything in the world without thoughts interrupting our perception. Basho is showing his experience—that he is seeing the hill without a name, without identification. Just as it is. And then he adds another layer to it: thin haze. It creates another layer of lightness, of the unidentifiable nature of existence. With the thin haze, even what is unidentified, pure in its isness, is shrouded—like a concept of emptiness becoming true emptiness. With this haiku, I feel Basho was expressing how concepts are futile, even spiritual concepts. Spiritual concepts can take us to a certain understanding, but we need to give up even our understanding and be devoid of thoughts to truly be in a meditative state.

As you can see, three lines can mean a lot to a person who meditates. I would encourage those who meditate (and those who don’t) to read the haiku of Basho, Buson, Issa, Shiki, Chiyo-ni, and to read modern haiku journals like “Frogpond.” Whatever we find that enhances our meditation experience, it is good to use. We have many tools to get us into a meditative state—haiku is a bright example of one.