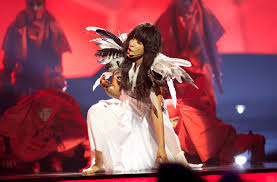 Entertainment—all kinds of shows, music projects, movies, video games, and so on—is an unlimited source of profit. Perhaps, this is why this sphere can boast of millions of various contests. No one makes a continent-wide show out of, for example, a mathematical olympiad, because audiences would not generally enjoy it or be amazed by it, and it would not be profitable. One cannot organize a mathematics olympiad with fireworks, voting for the most popular candidate, complete with dancing bears. Instead, media celebrities, who differ only in the way they look (with some rare, talented exceptions—but they just prove the rule), arrange contests for newly-made idols to promote them. Eurovision—a greatly overrated cultural event that annually takes place in Europe–is one of such contests.

My primary angst with Eurovision lies in the quality of the music they promote, which is surprisingly low. Has anything original, creative or worthwhile been introduced at this contest in the recent decade? In my opinion, only Lordi—the Finnish heavy-metal band that won the contest in 2006—performed decently with their “Hard Rock Hallelujah” (and I am not a fan of heavy-metal music); if other participants could demonstrate at least the same level of performance, or the same creative approach, Eurovision would be saved. Instead, we get to see an endless series of participants, singing similar songs on the same topics, in similar voices.

In addition to its low quality of music, Eurovision is a political event, which sours the atmosphere. The recent finalist—whose victory was, supposedly, considered to contribute to the matter of enforcing tolerance towards the LGBT community—is a proof of this claim. In the times when European countries and the Russian Federation sought to strengthen their economic and diplomatic relationship, the victory was given to a Russian singer. In 2004, when there was a democratic uprising in Ukraine, and Europe supported it on a diplomatic level, the victory was given to a Ukrainian participant. I am not saying Eurovision is entirely political; I mean the results of this contest seem to be connected to political situations too often.

Another cringe-worthy aspect of the contest is how Eurovision is not even about culture. Culture is about the synthesis of history, religion, visual arts, literature, music, national mentalities, and traditions. Eurovision is about who is going to look like a freak the next year, and how much money the organizers can possibly raise. In my opinion, only eastern European countries tend to see this contest more or less as a serious enterprise; western Europe seems to realize how Eurovision is a feast of kitsch and bad taste.

I might be accused of being a hater of Eurovision, which makes me a biased critic. Indeed, I am. But this is due to the reasons I listed above: the lack of brilliant participants, the relative dependence on political situations, and the overall low level of quality of the contest that does not seem to have connection to the truly rich culture Europe has, and instead seems to be a blend of glittering celebrities who speak the words of lyrics in microphones, while there is music in the background.