My name is Trevor Higgins. Though Higgins may now sound like an English surname, its origins go back to 6th century Ireland, and a half-mythical figure of Uiginn, or Niall of Tara, who is believed to have been a Viking.

I was born 30 years ago, on May 20th in 1983, on the south side of Boston, Massachusetts. Naturally, I can’t remember almost anything that had happened during the first two or three years of my life, so I had to interview my numerous relatives to know more about those times. My father, Patrick Higgins, was a deep-water sailor; after my birth, he went ashore and started working on a port, which has remained his occupation up until the present. My mother, originally Mary O’Brien, was a municipal college teacher of English literature. By coincidence, they met each other not in Massachusetts or any other American state, but in India, during the Holi festival in 1979, and in 1981 they married in Boston.

I am the eldest child in our family. In 1986, my mother gave birth to Sean and Lynn—they are twins; their hair is as red as fire, and their temperament is the same. Being their elder brother and having to take care of them, I had hard times when our parents were away. Now we are getting along fine, but back then, they were two little daredevils seeking to show me how much destruction they could deal.

When I was six, I started attending Josiah Lyndon Elementary School. My favorite disciplines there were drawing and literature. I participated in numerous citywide and statewide drawing contests among children, and even won first prize in June, 1994, for the best landscape at the Prennings Contest. This fact encouraged me to develop my artistic skills, so when I entered high school, I already knew that I wanted to attend the Art Institute of Boston at Lesley University. I worked hard on my skills, and attended fine art courses—at the age of 18, I entered the Institute. At Lesley University, I focused on the conception of minimalism in fine arts; the topic of my thesis was “Minimalistic Depiction of Faces: Simplifying K. Malevich,” where I researched ways of evoking emotions by means of an extremely minimalistic manner of painting, assuming composition, scene, and colors.

After my graduation in 2004, I spent about a year and a half traveling. I went across the United States, and traversed the continent from east to west, and back again. I have been to Native Americans’ sacred lands, visited all the Great Lakes, the Grand Canyon, and many other inspiring places, making sketches and etudes. I’ve traveled to other countries as well, such as Peru, Iceland, and China. In the winter of 2005, I visited Saint-Petersburg, Russia, and fell in love with this city. I bought a cheap camera, and photography became a great aid to me in developing my understanding of minimalistic art; these journeys also helped me understand myself better.

In my wanderings, I read a lot, using an electronic book. Though all the books I read were interesting, they lacked something significant, and when I finally understood what it was, it determined my further occupation and career. One spring day in 2005, I thought that modern publishing houses often focus on plain text in books that were meant to be read by an adult audience, and that they rarely inserted illustrations in such books. So, starting from 2005, I began to create my own illustrations, adhering to my style of drawing. I illustrated H. Murakami’s “Hear the Wind Sing,” Jack Kerouac’s “On the Road,” “One Hundred Years of Solitude” by G.G. Marquez, and many other novels. I also sent these illustrations to different publishing houses, hoping to be hired by one of them as a full-time graphic designer.

In 2007, my efforts finally paid off, and I was contacted by an HR manager within “High Beacon Publishing,” who invited me to attend an interview with him. This is how I found a permanent job as an illustrator, connected to what I like doing most: drawing and painting. That year, with the help of my friends Tina Mendez and Tony Lee, I organized two exhibitions of my paintings in the “S21” gallery. My works also appeared in catalogs, and I even managed to sell one of my paintings for $1500, which remains the most significant sum of money I have earned from selling my work. 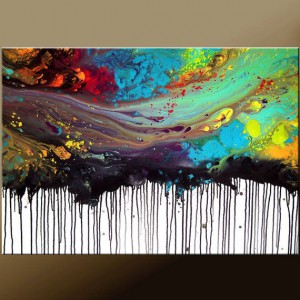 In the period between 2008 and 2011, I wrote a number of articles on art, and published them in the local media. At present, I am writing a book about the expressive power of minimalism, though my style of painting had changed a bit. I still work with “High Beacon Publishing,” though I also sell my illustrations to other publishing houses.

“Autobiography” is a word that might confuse some people. Biography means the story of someone’s life. "Auto" means about oneself: so the word means the life ...