Why is the Government Dangerous? 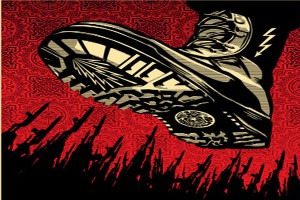 Q. Gary, you are renowned as a fierce opponent of the current government. But at the same time, many of your mottoes resemble the ones proclaimed by the government. What is the difference between you and them?
A. Thank you for this question, Oprah. The differences between us are significant, and I feel that it’s necessary to stress them once again. Our mottoes are about equality, prosperity, and freedom–of course they resemble the officially proclaimed ones. The difference lies in the fact that the government exploits these ideas to manipulate the electorate for support, whereas our goal is to remind people they already own these benefits, and that it’s the government that is holding people from regaining them.

Q. What do you mean by “holding?” Isn’t the government protecting people’s rights?
A. This is a fine but important distinction. Let me explain. When a politician says, for instance: “We must protect our freedom of speech,” don’t you ask yourself the question, “Protect from whom?” Isn’t it obvious you don’t need to protect your rights from your neighbor, wife, friend, or any other citizen of this country? Tell them: “The government is spying on us.” If they don’t agree with you, you may argue, fight, or ignore each other–no one’s rights are infringed anyways. But, if you write the same on your blog or post such as an article on some popular website, the chances your claims will be censored increase drastically. I don’t say you will be imprisoned for sure–unless you provide evidence in support of your thesis, be it a strong analysis, a gossip from insiders, or whatever.

Q. As did Snowden?
A. Yes, though his case is a bit divergent in terms of the methods of obtaining information. Anyways, we all know our national media doesn’t publish materials that the government doesn’t want them to publish. So, my question is: “Isn’t it the government we need to protect our rights from?” People enjoy suing each other. The government tells them: “Yes, go on, that is how you can protect your freedoms.” But this is a lie. That is how our unity is broken–this is how we are becoming disjunctive. I can reach an agreement with my fellow citizens. They cannot put you in jail for what you say, because they are the same as you. But the government can–and thus it is the only force that can infringe on your freedoms.

The main goal of most interviews is to create an informational product. This is one of the most common ways of gathering information, and it is used by journalists. The method o...