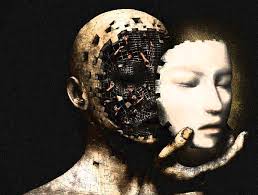 Setting my old laptop on a makeshift table made of leftover wood and cardboard, I sat in the cold garage of my shared living house. I lived with nine other people, mostly single guys, in a three-storey house. It was more fun than one could imagine, including the ensuing mess of many bachelors together.

This late autumn night, I was on Skype with my wife, who was in Ukraine at the time to visit her parents. Since I didn’t want to make noise while my roommates slept, I enclosed myself in our unorganized, freezing garage, with two layers of sweaters.

Anna, my wife, wanted to do a collective meditation session, and I agreed—it’s not good to disagree with my wife, unless you want trouble. Anyways, we started doing affirmations, saying certain phrases to focus our attention inwards. Slowly, my wife said affirmations for each chakra, our plexuses along our spine that are supposed to have energy. After reaching the crown chakra at the top of the head, or sahasrara, and saying the affirmation for that center, we meditated in silence for awhile.

Spontaneously during the silent meditation, my consciousness shifted dramatically: for some reason, I had forgotten my name, my personal history, ambitions, and what others think I am. In essence, I had forgotten who I was, completely.

I would like to say I felt joy and satisfaction, but it was deeper than these sensations. It was simply being who I was, truly. Though this experience sounds plain on the surface, it seemed like the loss of personal identity was the greatest moment of my life, in retrospect.

There is nothing special in being oneself truly, other than that it is beyond normal consciousness, which is driven by the ego. It is like being fully conscious, and in that encompassing awareness, the ego drops away.

When my wife stated it was the end of the meditation, I was still in this state. Everything around me was new, but in unison: there was no thought of the separation of things, including myself. Without a name and anything to identify myself with, or anything else for that matter, life was a constant stream of pure consciousness. But slowly, as I talked to my wife after the meditation, thoughts of who I was began to come back, piece by piece—until I was filled with my past reality once again.

But yet, my past reality, though in my present, will never be the same again. I had touched the real self within me. After knowing the truth of oneself, how can one go fully back to their old self?