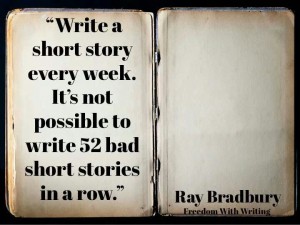 A short story is a genre of prose, normally composed in a narrative manner, which is smaller than a novel and usually has only one storyline. It also commonly has a limited number of characters and, unlike a novelette or a novel, it revolves around one major problem, conflict, or event.

Short stories can be written in a variety of styles, whether it is science fiction, fantasy, realism, psychodrama, or any other stylistic preference. It may be written from a first person perspective, or from the perspective of a detached narrator, or from the different perspectives of characters in the story. It may include dialogue, or may be solely based on the author’s words. It can be based on real-life events and experiences, or can be completely fictional.

Steps of Writing a Short Story

Samples for Writing a Short Story

I like to look through holes. The gaps in a steel mesh above the conductor's door on a tram. The space between escalator stairs as they climb. The spaces between leaves on a tree, especially on a windy day. Some people are into getting close to perfecti...
Maybe I'll make pasta. Add chilies to it. Mary was alone again on a Saturday. Her father, Harold was on another business trip to Mississippi, and the house was all to herself, which meant she could have pasta every day if she wanted. Her m...
His nose could have been mistaken for a carrot. Not one of those dirt-rich oblong carrots, but a baby-sized carrot packed in those free-moving, punctured plastic bags. Yet more...