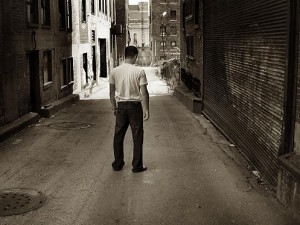 It was late at night when I dropped in at a local 24/7 grocery store and bought myself a couple of bottles of cheap beer. Despite being late August, it was still warm outside, though during a recent morning, I noticed hoarfrost on the grass. The summer quickly ran to its end, and though I was an adult, I felt almost like a student who had just realized that there was only one week of summer vacation left. I paid for the beer, chatted with the clerk for a couple of seconds, and left.

I walked along the empty streets—in our town, no one really hanged out after midnight, at least in the district where I resided; the locals were rather quiet people, and the youth preferred to spend time in the center. Lonesome yellow streetlights smoothly glowed in the dark, filling the air with cozy amber tones, and as I walked, I gradually delved into memories of the previous fall. I remembered changes in my personality, though minute. As my legs stepped on the pavement, my mind broadcasted the visions from the past: falling leaves, first frosts, the smell of smoke in the air, the warmth of her hand in my pocket, an alley in the park. I couldn’t remember what we were talking about though, but it didn’t matter.

Now she was away. Not forever—just for a month or so, but I still didn’t want to count how many days were left until her return.

I found myself standing on the edge of a clay cliff on the outskirts of town. The cliff was rather high—about 50 feet—and its bank was covered with weeds and thistles. A couple of hundred of feet further, the sea was rolling its waves glittering in starlight. I found a low broken bench several steps away from a place where I was standing, sat down, and opened a bottle of beer with my plastic lighter. One of the most useful skills I ever learned.

I tilted my head back and gazed at the sky. The night was starry, and there were no streetlights around, so I think I could see every little star up there, every subtle offshoot of the Milky Way, every blinking satellite. I made an attempt to imagine the distance between stars, but I failed almost immediately, as I tried to count how many miles are in one light-year. Then, I wondered what were the chances that the energy particles would organize in a way they did to form the universe as we know it today. Perhaps the chances were even lower than if a monkey was expected to write “War and Peace.” I sipped from the bottle, and tried to calculate the chances of meeting the one for whose return I was waiting for. Among seven billion people living on our planet….

I sighed. Suddenly a question came to my mind: how could the wonders of this world be accidental? I believed in evolution, in the theory of survival of species, in science, and in other things that people like to worship. But at the same time, I had doubts about one thing: where did it all come from? No matter what scientists said, I never trusted the Big Bang Theory in entirety.

The more I looked at the sky that night, the more the astonishment grew within me. The astonishment with our world, with probabilities and improbabilities; with unknown stars; with the stormy night sea, and the lights of a fishing port in the distance; with the unpredictable but surprisingly warm relationships after desperate failures; with mysteries, infinite distances between galaxies, and the laws of nature. Though many people would perhaps find it strange, but back then, I thought about God for the first time. God, the universe, being, nature—names don’t matter. I was sitting with a bottle of beer on the top of a clay cliff, listening to sea waves, and thought that the only thing that is impossible in our world is an accident.

It was getting lighter. I stared into the skies, looking for God there. I even asked It: “Are You there?” It didn’t answer. But when I was about to leave, I noticed that one of the stars right above the horizon blinked. I got up from the bench and slowly went home, smiling.