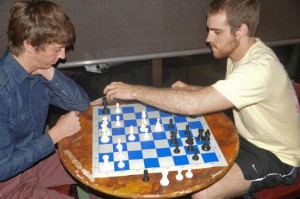 His nose could have been mistaken for a carrot. Not one of those dirt-rich oblong carrots, but a baby-sized carrot packed in those free-moving, punctured plastic bags. Yet more distinguishable were his cheeks, slit in as if a wild animal unintentionally scathed a straight line down the skin by his cheekbone. A rugged Pinocchio if I ever saw one. But his name wasn’t that beefy: Marty. Marty was a name white collar folk call in for Sunday dinner for tidbits of entertainment or a chiseled smile. Jared seemed like a more convincing name for him, especially since that nose of his could have poked Napoleon back to eating crêpes—but they would have it that this gritty-faced man (we haven’t gotten into his personality yet) was named Marty at birth. No, it’s not what you think—it isn’t Martin. Parents do the darndest things.

Anyhoo, I bumped into Marty at chess club. I mean, bumped into him. After our awkward first contact, colliding into each other while I treading away from a board with two experts blitzing it out, my eyes fixed like marriage on the action, and Marty stood still while he contemplated the chipped brown paint of the archway that led into the stuffy playing area—I thought it was time for a game of my own. I sat like an anchor on one of those rickety, unvarnished wooden chairs and stared down into his light hazel eyes that reminded me of the color of autumn leaves by the bluff, where I would have my weekly walk to stamp out my stress as I cruised down a deer-made trail that exited out to the Puget Sound. Below his gaze was a name-tag placked on his plain-as-prison t-shirt that read in scribbles, Marty. I pushed on him with my words to clear out the memories of my fall excursions and my sudden concentration on his atrocious name before I assumed the title of mental warrior.

“You wanna play a game? I haven’t played very much lately….”

I always use that line to give false confidence to my opponents. He shrugged like he wasn’t there for chess, but for meeting an old friend that he remembered needing to do backyard business with. My anxious lips pursued the game.

I slid my queen-pawn up two spaces, initiating my usual London System. He replied quicker than I expected, literally tossing his queen-pawn two squares ahead. I knew at that moment that his earlier hints of diffidence were more real than the constant sword-play displayed by his nose: I was either facing a confident chess player with the backing to cause awe or a person that hadn’t phased out of the ruffian era of youth.

Forty-two moves in, I was gripped by the hope of what you call, “a comeback situation.” I had to either tough it out or break into a near-dysfunctional offensive to take what equilibrium I could. I like to win, so I went for the hero act. The game ended in a questionable draw, with a move around sixty-two or something that could have been a win for Marty. I don’t know if he honestly missed it when he offered a truce, or if he was teasing my brawn.

Two years, six weeks, and four days later, I caught sight of the hard-faced slick. We were both on public bus 41, going in the direction of a culturally-pampered town named Lake Forest Park. That place needed culture—with a blunt name like that. Anyways, Marty and I didn’t talk—I didn’t try to start anything and neither did he. But before I got off at a bookstore-cafe to savor time before work, he swiveled his face in my visibility and he took a good stare in my eyes culled by the cradle-like movement of the metro. A smirk grew from his lips, like he’d been cut on the left side of his mouth. My eyes widened, pushing back some sleeping dust. The moment must have been only two seconds, but I could tell what the ol’ piranha was thinking. I won that game. And I knew it, as my jaw tightened to the halt of the hypnotic roll of the bus.