Every other Saturday, Master Rick of the Seattle Zen Monastery asked me to sweep the courtyard with a brittle straw broom. This week was more than the usual load: pigeons had left their excrement over the courtyard–which meant I had to mop up their mess after sweeping. Despite this extra work, the words of Master Rick–a tall, straw-thin man in his 60s–echoed in my mind: “Sweep like you are sweeping your thoughts away–one at a time.” I wasn’t sure if it was a mystical statement or just an excuse to get a 17-year-old to do his chores. But it didn’t matter what I thought: I had to do my duty and that was the end of it. 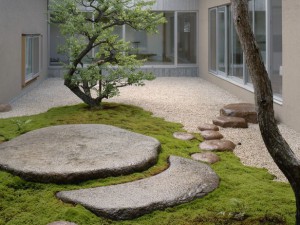 I walked as any boy would have on a Saturday–without an inch of a rush. The tool shed was next to the eating hall, about a two-minute walk through cedar blossoms that had recently plopped out to see what life was all about. The sun was harsh on my shaven head, though the shade of the cedars helped a bit to lessen the heat. It was one of the times in the weather schedule where the sun bore down without halt. It seemed to present itself with a vengeance–some type of retaliation against the continuity of rain.

I reached the rusted shed and slid open its light, foil-like doors. I was overcome by the smell of mustiness, caused by the lounging of unused metal and wood. The broom was kept in a corner where invariably I found spiders. The only question was what kind of spider would I find this time? One week, I found a black widow there. One had to be careful, even in a Zen monastery.

The best part of my usual sweeping procedure happened in the first few strokes when I felt the friction between the threads of the broom and the fixed strength of the granite slabs. After a few minutes, though, I would lose interest in this sensation, and carry on with my duty with machine-like accuracy. This time, like all others, I swept from left to right, going to one end of the courtyard, turning around and going to the other side.

As I neared the completion of almost half of the courtyard, I began to be perturbed at my robotic motions. Why did I have to do it the same way every time? I thought. I stopped sweeping. A slight breeze filtered through my traditional white garb. Spots of sunlight wavered through the cedar trees. I was thirsty, and my tongue was dry. My slight, late-morning headache tingled on my forehead. I was holding the broom with a half-tight grip, and its straw was still stuck to the grey granite.

The broom began moving on its own. I was a witness to its movements, sweeping in seemingly random directions. I began to think it was strange that I was following the actions of a broom, but hey, I thought, Zen is about going beyond thoughts. Might as well go with the flow.

After about 15 minutes of being guided by the broom and being a witness to its will, I felt it stop. I looked around the courtyard: it was a disaster–the dust, dirt, fallen leaves, and leftover trash from visitors had just been shifted around instead of being swept into neat piles at each end of the courtyard.

With the dishevelment in view, I began to think that I needed to sweep it as I had done so many times before. I walked back to the edge of the courtyard with my head down in weariness. As I began to sweep again, a husky but high voice sounded over the rustling of cedar blossoms, “You did it right the first time.”

I flashed my gaze towards the voice in remembrance of Master Rick and saw him displaying his usual slight smile with a pointed, grey beard.