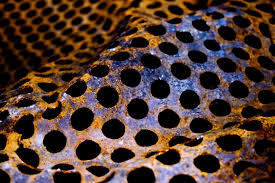 I like to look through holes. The gaps in a steel mesh above the conductor’s door on a tram. The space between escalator stairs as they climb. The spaces between leaves on a tree, especially on a windy day.

Some people are into getting close to perfection as possible, cleaning and repairing walls and other surroundings excessively. A flaw, such as a hole, can give depth.

I was riding a tram into the center of Kyiv, and there was this section of paint that had collapsed, leaving a purple blotch-like metal beneath the usual yellow paint. It was like a vein cut into, yet it didn’t bleed, exposed to passengers without its consent.

I don’t tell people about the holes I see and the fascination I have with them. They would comment about me needing to take a certain drug or they will think about the psychological reasons for enjoying holes. One time, I wrote a Facebook post about the gaps between the escalator stairs leading to the subway at Vokzalna Station, and there was some half-encouraging likes, which really meant my friends liked the post to show they are still my friends.

So, I admire them on my own. But I could tell my colleague at work about them. He has a quirky sense like that. But then again, what’s the point? Sharing this fixation won’t do anything. I don’t need validation.

I remember the film Pi by Aronofsky, where this psychotic mathematician drills a hole in his head. At times, I’ve imagined myself doing the same. I am not suicidal by definition, but I do have morose thoughts. They’re like satellite signals. Spontaneous and maybe mine, or maybe somebody else’s.

I know on the tram, men take out their boredom by looking at women, especially in summer. I look at women as well, but more for their design, colors, and ideas of princesshood they try to portray. Even those emo girls want to be emo princesses.

This morning, I looked at a young woman’s dreadlocks and wondered if she has bugs crawling in them. Maybe she eats those bugs. I went too far in my contemplation.

I got off at Vokzalna Station and assessed the tar of the railroad tracks for a split second, as usual. Dry, spotted with beige drying powder.

Taking to the left side of the escalator, I walked up the stairs, which is for people who are coming down. I need exercise before I attend my sit-all-day job as a content editor. The corridor to the subway above the stairs is a languid gallery of people. I evaluate the people momentarily for traces of who they are.

Once out of the corridor, there is a fast-paced square of moving bodies over rickety cement. My favorite voice from the square is a lady in her 50s or 60s, yelling in a crisp, motherly melody, “Hot potatoes! Cabbage! They are good!”

Almost always, there is a panhandler beside the giant, swinging, glass-door entryway to the subway. He has crutches, and a half-shaved scalp as if done by a freak accident. I feel a mix of compassion and comedy when I see him.

On the ride down to the subway by escalator, people on the other side who are going up like to stare at those going down. Another gallery of random individuals. I like to look above the people at the banner advertisements, seeing what flaws are present in the wall and white paint.

On the right platform of Maidan Nedjalestnasti Station, there is a door with a button code panel. Two of the buttons are missing: number two and number six.

When I enter the subway car, I commonly check to see if all the overhead lights are working. Most of the times, all of them are, but I take delight in seeing the ones that aren’t.

After exiting the subway complex, I walk through Kontractova Plosha’s mini-shopping center, sometimes hearing live bagpipe music being played over a karaoke set of cheesy metal, or a fakely-jolly, bearded man dressed in traditional Ukrainian garb trying to give away coupons to a buffet by shouting slogans at passing people. When I pass the little church-turned-museum… but this morning, I didn’t continue to the green and white Nikolayav Church with its silver entryway pillars that connect to make a type of awning: someone spoke to me before I could cross the street.
“You like to eat fish?”
It was a raggedy man, either sunburned or he drank too much alcohol.
“Yea, I guess I like to eat fish,” I replied.
“Yea, me too,” the raggedy man looked at me curiously, like he was examining a goat to sell.
“Well… I got to go to work,” I said, turning away.
But as I started to take a step, the man continued.
“You must like rabbit as well?”
I didn’t know if I should have ignored him, or supply a semi-polite smile. I gave in for an inexplicable reason.
“Yea, rabbit too….”
I took two steps before the man squabbled on.
“How about that cheese with holes in it, you know, Swiss.”
I stopped as soon as he mentioned “holes.”
“Why are you talking about holes?”
I felt my heartbeat increase in my throat after I spoke. The man’s expression seemed even more contorted with this question.
“I don’t know—I just like cheese with holes….”
“Yea, well, don’t try to read my mind…”
I wanted to say something explicit—even banally explicit. But it seemed unnecessary for a helpless man. I toned down a bit.
“By the way, what is with the questions?”
The man’s head leaned down a bit, producing a slight sob.
“Hey…” I said with a hint of pity, but the man didn’t look up from his melancholic position.
“I was just wondering…”
But I realized words wouldn’t help, so I stepped closer to him, and put my hand on his dandruff-ridden shoulder.

He lifted up his head. His tearful gaze met mine. I saw his nose, dotted with holes from a case of chickenpox.
“You monster! You want to put me to death?”
He said this while peering into my eyes. I felt he meant it, though it was unsubstantiated.
“There must be some confusion… I’m sorry,” is all I could say.
As soon as I said the word “sorry,” he straightened his expression and his voice lowered.
“Good. Meet me here after work—I have an offer for you.”
“Yea, okay. I’ll see you,” I said, and I walked away, shuddering with slight anxiety.