How to Use Commas 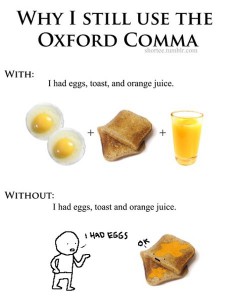 The general rule for commas is that we use them to make reading more understandable by separating parts of a sentence so that readers don’t get confused about what a certain text means.

When to Use a Comma

Bill had a phone, a record player, and a flute.

2. Putting two independent clauses together (phrases that are complete thoughts).

Emily wanted to win the race, but she was not fast enough.

3. After an introductory statement.

Since Nick was sick, he didn’t go to school.

4. Showing parenthetical parts of a sentence.

The Seattle Space Needle, which was not made by astronauts, despite its name, is a fabulous piece of architecture in the Emerald City.

The city of New York was once a poor, dilapidated, uncultured fishing port.

6. Before quotes and sometimes after them.

“You are so kind,” Hilary said with a wink that creased her cheek freckle.

The greatest moments of life, according to philosopher Barbara Hunst, is when, “the ego collapses and reality is set clear.”

Bill was a warm fellow, not cold at heart.

8. To make sure there is no confusion.

Instead of: Let’s eat dad!