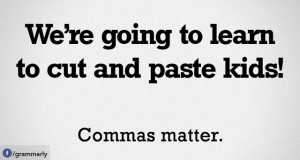 Though English grammar is an extremely vast subject to make generalizations and summaries about, practice shows that many students tend to make similar mistakes from generation to generation. College and university professors could probably compose charts and hit-parades of such mistakes, but for obvious reasons, this guide lists only those mistakes which occur most often.

Clarification of 'That' and 'Which' That is used in what's called restrictive clauses...
Misuse of Commas Too Many Examples: "I was a bouncer, at a club, that hosted rock bands, such as The Conversations." "There was, a giant referee, in the middle, of a god named Uselferous." "...
✕
Write with confidence at a college level