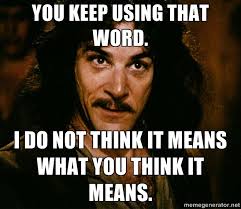 What is Incorrect Word Usage?

Along with words that are usually misspelled (such as “there” and “their,” for example) there is also a group of words whose meaning are usually misunderstood. This leads to a mistake called “incorrect word usage.” Usually it manifests itself either in using one word in the meaning of another, or in using a word with the wrong prepositions, or in the wrong context.

Rather often, people use this word considering it to mean some sort of tragedy or misfortune. However, the real meaning of the word “travesty” is parody, or even mockery.

e.g. (wrong usage) It was such a travesty for him to crash his new bike.
(correct usage) Let’s go to the theater tonight! There is a nice travesty play being performed there.

This is a case when a word is used with a wrong preposition. Amateur writers and students tend to use it with “of”; for example, “a good film comprises of…” However, “to comprise” already means “to consist of,” so there is no need to use additional prepositions with it.

The word “ironic” is often used to describe a funny coincidence, though its true meaning is when something goes directly opposite as it has been expected, and can cause a wry smile.

e.g. (incorrect usage) Isn’t it ironic he arrived at the station right when the train, with his girlfriend, departed?
(correct usage) The irony of his situation was he was the best worker, and yet he was the first and the only one who was fired.

“Assure” is often confused with other similar sounding words like “insure” and “ensure.” To assure means to persuade somebody of something, or to make another person trust your words. “To ensure” means to make sure something will happen. “To insure” means to prevent something from happening.

e.g. (incorrect usage) I insured him selling all his stock was a good idea. Susan checked the airport’s website to assure she remembered her departure time correctly. Megan thought she was ensured of anything bad in her life.

(correct usage) I assured him selling all his stock was a good idea. Susan checked the airport’s website to ensure she remembered her departure time correctly. Megan thought she was insured for anything bad in her life.

Rather often, this word is used in the context of any remarkable date. For example, “Today is our anniversary: it is seven months since I started dating Kelly.” However, anniversary means only something which happens annually—once per year.

Surprisingly, “instant” does not equal “quickly” or “without hesitation.” The truth is this word is closer to “accurate,” meaning a certain precise moment in time.

Many people use this word considering it to mean “to hold a conversation.” The shocking reality is this word does not exist at all. It is better use the verbs “communicate,” “talk,” or other synonymous words.

This word reminds of the adjective “enormous,” and hence might be considered to mean something like “grandity.” However, this word means something extremely evil.

Students tend to use this word as synonymous to “awesome” or “great,” whereas its true meaning is “horrible.”