Proper Use of Pronouns 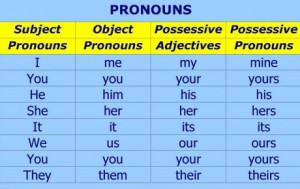 Pronouns that are the subject of a sentence are called subjective pronouns. They can be used to rename the subject (in this case, they follow the verb “to be.”)

All other pronouns that are not related to subjective or possessive are objective pronouns.

– Pronouns should be agreed in number. Some pronouns can be tricky though. Remember that everybody, everything, each, anybody, anyone, anything, either, nobody, neither, no one, someone, something are singular pronouns.

– Try to avoid piling up pronouns. Instead of saying: “Anna has invited him and me to her office,” it would be better to say, “Anna invited us to her office.”

– In sentences with several pronouns, make sure it is clear which noun a pronoun refers to. For example, the sentence, “John and Thomas visited his brother in the hospital,” is troublesome because it is not quite clear whether his is related to John or Thomas.

– Sometimes it is better to change or eliminate a pronoun to make a sentence clearer.