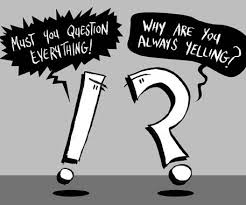 Period (.)
End a sentence. Example: I love you more now.

Question Mark (?)
– End a sentence and show a question/inquiry. Example: Have you been there before?

Exclamation Point (!)
– End a sentence and show excitement or emphasis. Example: Don’t go there! It is too amazing!

Comma (,)
– Two or more adjectives. Example: You are a wonderful, charming person.
– Items in a list. Example: You need to buy a watermelon, some milk, and a pound of cream for the party.
– A name of a city from a state. Example: I live in Chicago, Illinois.
– An independent clause and a conjunction. Example: You are a great sportsman, and a great person in general.
– Direct quotations from regular text. Example: “Go to the baseball game,” said Jimmy.

Semicolon (;)
– Separate two independent clauses that have a similar meaning. Example: George rarely found the time to write poetry; on his way home from work, he would write about 10 minutes on the train.
– Separate items in a list that already have commas. Example: She had knives, forks, spoons; balls, chains, guns; pillars and stairs.

Colon (:)
– List items. Example: At the store, we had many things to sell: bubble gum, chocolate, and soda drinks.
– Elaborate/expand on a statement. Example: The days before our grandparents were much different than now: no televisions or radios to distract us from creativity.

Hyphen (-)
– Create two prefixes. Example: Pan-Asian food is amazing.
– Make compound words. Example: My sport-cup is used when I drive my flashy car.
– Write numbers as words. Example: There were forty-seven ducks in the pond. And many other uses…

Em Dash (—)
– Show surprising ideas. Example: I once had a dragon—a plastic toy one.
– Add a sidenote. Example: James was a strong man—he was often referred to as a giant—that could lift up a car with ease.

En Dash (–)
– Show periods of time. Example: The years 2011–2013 were super productive for me.
– Can combine open compounds like hyphens. Example: The US–Mexico border has been bombarded by bananas recently.

Single Quotation (‘)
– Enclose words within a quoted sentence. Example: Harry said, “Bill was written off as a ‘whiner’ when he complained too much at work.”
– To show key terms as new. Example: The state of ‘thoughtless awareness’ is what every meditation practitioner strives for.

Double Quotation (“)
– Show a direct quotation. Example: “I always believed in you, Mike,” Brain said with a fatherly wink.
– Be sarcastic. Example: He was so “cool” that he had to lose all his money.

Apostrophe (‘)
– Show that something is someone’s. Example: This is John’s bike.
– Make a contraction. Example: I can’t do it, Mom—the wind is too strong to pull the boat to the shore.

Parenthesis (  )
– Make an idea more clear. Example: He said he was coming home at 6pm (exactly on the dot), so we don’t need to worry.
– Comment or show a side note. Example: I was the best basketball player on my team (despite my school being relatively small), and I eventually won the national championship.

Ellipses (…)
– Show that an idea continues (use four marks to end a sentence). Example: And they lived happy ever after….
– Show that there are missing words. Example: And during that time, I had been… but it was not all that great.
– Build suspense or stress. Example: And the gigantic unknown creature crossed the street… not knowing where to go next.
– Presenting a part of a quotation. Example: “… and it ate the whole land with one gulp.”