The Effects of Global Climate Change 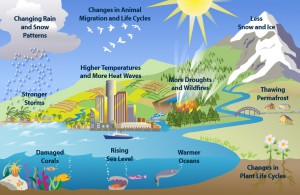 During the last century, more inventions were made than during the whole of history (Collins 64). Humanity flew into space, tamed atomic energy, found a way to cure many diseases that were considered incurable, and almost every day is marked by a new breakthrough. However, there is a downside. For a long period of time, people did not think about the consequences of their exponential development. Vast tracts of forests were cleared for agricultural purposes, thousands of tons of carbon dioxide dissolved in the ozone, hundreds of species of animals and plants became extinct each year. The rapid development of humanity renders a bad influence on Earth. One of these influences is climate change.

It is not a secret that a couple of hundreds of years ago, the climate on Earth was colder than now. Many scientists warn about global warming—a process of a constant increase of the annual temperature across the whole planet. For the first time, its surge was recorded in the last quarter of the 20th century, and since that time, the average temperature had increased by 0.7° (Freanz 237). The further one goes from the equator, the more obvious climate changes become.

What are the possible consequences of global warming? According to the recent reports from the United Nations, during the 21st century, the average temperature will rise more than 1, 4-1, 8° and will cause Arctic glaciers to melt faster (Ramus 24). The sea level will increase by 10 cm. It does not seem to possess any danger, but in reality, it will become a serious threat for those countries that are located not too high above sea level. Some specialists predict that until the end of the current century, the ocean will rise a meter on the whole. The Netherlands, Great Britain, Japan, as well as the islands of Oceania and the Caribbean basin will be at risk. 30-40% of species and ecosystems will become extinct, as their habitat will change much faster than they adapt. If the temperature increases by one degree Celsius, dramatic modifications to forests’ composition will occur. Some species have already begun to react to climate changes. For example, migratory birds start to fly away later in autumn and to come back much earlier in spring.

Global warming will negatively affect precipitation. In arid regions, such as Central Asia, Australia, and the Mediterranean, South Africa, and so on the situation will become even more complicated due to the reduction of precipitation (Reese 45). At the same time, some regions may suffer from abnormal cyclones and the heavy rains that have become much more frequent. The recent hurricane in North America may be a demonstration of these processes. Such changes will have an adverse effect on agriculture. Due to warming, it may improve in Northern Europe, but in Southern Europe, Africa, and many regions of Asia, high temperatures, droughts, floods, and soil erosion will cause irreparable damage.

Specialists predict that yields in Africa and Asia will decrease, and Australia and New Zealand will face a great lack of drinking water (Opus 235). A risk of floods in Europe will increase, and the eastern coast of the United States will undergo increased numbers of hurricanes and soil erosion. In addition, global warming will also create a favorable environment for diseases, so a dramatic growth of epidemics and pandemics can be expected (Lank 87).

Scientists have discovered that Earth is warming much faster than it did before, and there is convincing evidence that it is humanity who is responsible for that. At the moment, research that aims to find solutions for this problem is being conducted. Every country should take action to prevent causing more damage to our planet, as the consequences will be serious for every citizen of Earth.

Opus, Helen. Drinking Water is All We Got. Boston: Academics Plus, 2010. Print.