‘Under the Dome’ by Steven King 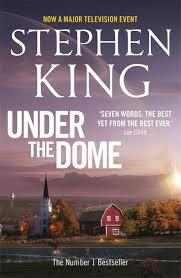 The recent novels written by Steven King are more and more reminiscent of social experiments. Perhaps it is just my personal impression and experience, but for me it seems that in recent years, King has increased his focus on social processes, on the human psyche, depicting all of its flaws and advantages, instead of mystical horrors. And which situation is more suitable for revealing all the skeletons in the closet than an emergency one? Isolation, an absence of control, and long pent-up impulses make extremely beneficial conditions for this, and in the novel “Under the Dome,” King puts the entire population of a small town into the same environment.

“Under the Dome” was published in November, 2009. King remarked that “Under the Dome” was a partial rewrite of another novel which he had started in 1978, and that was called “Cannibals.” Both the older story and the new one focus on a group of people who get stuck in a limited space altogether, and about the confrontations between them.

The initial event that resulted into 1,100 pages of the novel is rather simple, though inexplicable: the town of Chester Mills, ME, gets covered by a huge impenetrable and indestructible dome. No one can get in, no one can get out. Moreover, the dome emits some kind of radiation that causes malfunctions in electrical appliances: pacemakers, radios, and so on. As local authorities give up their chairs in connection with the appearance of the strange dome, Jim Rennie, Chester Mill’s Second Selectman, usurps authority. He establishes his own militia instead of regular police forces, and using the fact that nobody outside of the dome can affect the events in town, becomes the sole dictator of Chester Mills. However, he is opposed by a party leaded by Dale Barbara—a former marine who gets stuck in the town. After numerous misadventures, Rennie and his minions die, as well as the majority of Chester Mill’s population; only 26 people, including Barbara, survive the events under the dome, which turned out to have extraterrestrial origins.

King managed to provide his novel with ecological, political, and social motives, which makes it look almost epic, even though the location is a small town, and the described events unfold throughout just one week. King raises philosophical issues and questions our system of coordinates in terms of the trust in socio-political institutions, religious upbringing, and moral dogmas. In my opinion, the reason why “Under the Dome” may be so disturbing lies in the doubts that perhaps everybody has: “What happens if sanctions for anti-social deeds are canceled?”

This question had been raised in many post-apocalyptic movies and novels, but King’s manner of writing is, as usual, outstanding. Such personalities as Big Jim, Junior Rennie, Carter Thibodeau, Phil, and Sammy Bushey, as well as many other negative or controversial personalities could have remained undisclosed, but the dome (and the isolation from authorities and the rest of the society which it caused) made them manifest their suppressed destructive energy. The dome is the deus ex machina: the last feather that broke camel’s back.

Speaking of characters, the author, as usual, paid a lot of attention to their inner worlds, motives, fears, and other psychological attributes, which guarantees the readers’ empathy towards both “good” and “bad” personas. The intrigue and the plot intricacies leave readers in suspense until the final lines of the novel—King’s literary skill is undisputed.

“Under the Dome” is a novel worth of attention. It is more a social science fiction rather than a thriller, and viewed from a certain perspective, it may be seen as an attempt to disclose the origins of doubts or mistrust that many people experience towards social institutions from time to time. “Under the Dome” is King’s étude about the relationships between the individual and society, and about the nature and reliability of those norms that we take for granted.