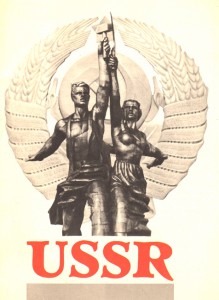 The stage is hidden in darkness. The only visible element is a neon tube encompassing the entire stage; it blinks with red light from time to time. In the background, industrial sounds can be heard: hammers, jackhammers, hydraulic pistons and gigantic mechanisms working.

In the upstage, a big screen slowly lights up. It presents old black and white documentaries from the Soviet construction sites of the beginning of the 20th century: the DneproGES power plant, the White Sea-Baltic Channel, and the Baikal-Amur Mainline.

The screen in the upstage gradually fades to black, and the first glimpse of light (coming from a single ceiling lamp right above the stage center) appears; the sounds start to mute. The audience can see a small room with dirty flaps of wallpaper hanging from walls; a bookshelf filled with books written by Marx and Lenin, a table with a samovar on it, and an armchair acts as the room’s interior.

ENGINEER – a tall man with a wrench, wearing a working coverall with a dingy, discolored hammer-and-sickle crest on it. He is intelligent and shy; he sincerely believes in the idea of a communistic future. At the same time, he is afraid of the KGB and political repressions.

MARIA – a woman who comes to the Engineer’s place from time to time; she is close to him, but it is unclear whether they are lovers or not; the audience is provided only with indirect hints of a love affair between them.

AGENT – a tall and thin man with pale skin and a bald head. He is dressed completely in black leather: peak cap, coat, and boots. The style of his clothes resembles a Nazi uniform, but instead of swastikas, the Agent uses Soviet crests. He consistently tries to make his conversationalists doubt in the ideological orthodoxy of their words.

* All actors wear stocking masks, which emphasizes their impersonality and the triviality of the events described in the play.

The Engineer is standing in the narrow cone of light. His appearance expresses anxiety and nervous awaiting for something unpleasant to happen. The Engineer cranes and stares into the auditorium. Suddenly, a knock on the door sounds.

ENGINEER (to the audience): It’s the KGB. I knew this would happen one day (walks from corner to corner). To open or not to open?

ENGINEER: What am I afraid of? I am a Party member, an honest worker. They cannot accuse me of anything (he sighs and shakes his head desperately). No, no, you know it never helps. I must open it. I have to. (He comes to the door and asks in a deliberately cheerful voice) Who is it?

ENGINEER: Oh, God… Yes, yes, wait a second (he lifts all the locks).

Maria enters the room. She is wearing a grey woolen skirt and a brown jacket; in her hand, she holds a string bag with products. For a second, she glances at the door over her shoulder, then shrugs and quickly hugs the Engineer. Then she comes to the table to lay out food on it.

ENGINEER: I am so glad it’s you.

MARIA: Were you expecting somebody else?

ENGINEER: You know I always am.

MARIA: I know. But even though we live in hard times, sometimes I think you are more worried than you should be. The KGB… (she speaks in a voice lower in volume) the KGB doesn’t take people just to meet a monthly quota.

ENGINEER: I wouldn’t be so sure. In March they took Yuri, Dmitriy, and Vladimir. People say they were accused of espionage. Do you know what those three did? They were working themselves out every single day, spending 12-14 hours a day at work—and they got accused of trying to wriggle into favor, in order to gain access to classified information.

MARIA: Oh my! But… But this sounds almost unbelievable! If you work less, it means you are a saboteur and a traitor. If you work more, then you are trying to access secret data. Crazy!

ENGINEER: Maria, please, be quieter!  The walls are thin, and I don’t want my neighbors to hear us. 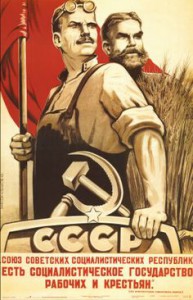