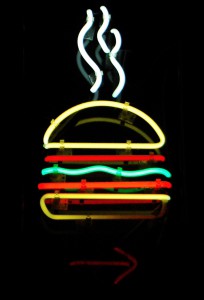 An old road house somewhere on a road in the Mojave desert, with a big blinking neon sign “OPEN 24/7,” and a card signboard claiming “The tastiest burgers you can ever find on the way to Las Vegas!”

INTERIOR, ROAD HOUSE – A TABLE BY A WINDOW – EVENING

A man and a woman sit at a table, both meditatively watching the dusk coming outdoors, and talk. He is drinking coffee, she is smoking cigarettes. Apart from these two, a lonely man is sitting in shadows upstage. The scene is dimly lit by an old lamp right above their heads.

JACK, a 30-year-old white man, wearing black jeans, a checkered shirt, and heavy army boots. He carries a huge rucksack, which is now standing on the floor under the table.

GLORIA, a woman of approximately 20 years, working as a waitress at the road house. She has blond hair, heavily made-up eyes, and wears a uniform apron. She is a chain smoker, and twirls a lighter in her fingers.

GLORIA (in a low voice, pressing the cigarette butt into the ashtray and gazing at her arms): But what do I do now?

JACK: With your life?

GLORIA: Yeah. I mean, I’ve done this and that, all kinds of stupid things, and it all seemed okay, but now I just don’t want to look back. Every day, I see faces that remind me of the past, hear conversations that make me reminisce, go to the same places… And there is no way out (covers her face with her arms, takes a deep breath). I want to find peace, want to forget about so many things, and escape this trap, but I can’t.

JACK: I know what you mean.

JACK: Yes. My journey began from that point (takes a pause, as if weighing the pros and cons of being sincere, then sighs). One day I woke up and thought about how fed up I was with my life. Running away was the most radical and seemingly the most practical way to deal with it all, so I quit my job, left my hometown, and for the first month, life was great.

GLORIA: I guess there is going to be a “but,” right?

JACK: Yeah. Distances don’t matter. Time doesn’t matter. Wherever I went, whatever I did, I couldn’t find peace. Because peace is not something you can find outside of yourself. Peace is already inside of you.

JACK: It is true. The past doesn’t exist. Something has happened—and that’s all, it’s gone forever. All that remains is a print in your head, in your memory, not the real event. You can mute it for some time by communicating to people, you can travel, take drugs or alcohol, but you can’t hide forever, because on quiet, lonely nights, it will come out and remind you that it is still there, lurking around.

GLORIA (ironical): Just great. That’s exactly what I need (lights another cigarette, and takes a deep inhale… then she looks at Jack with hope). You said something about peace?

JACK: Peace depends on you. Peace means approval. If you keep running away and hiding, your past will chase you, your fears will hunt you. When you stop and look at them, they stop as well. And the closer you look, the less significant they become. It’s like when you turn on a flashlight: darkness dissolves, and you can see there is nothing dangerous behind you. And then you are free to go in whatever direction you like; you don’t have to run anymore.

(Camera shifts to a man sitting in shadows. His eyes are closed, but he seems to be listening to what Jack and Gloria are talking about attentively. He nods in agreement, and a weak smile appears on his face).