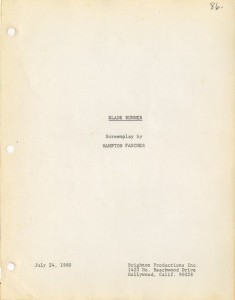 A screenplay is a creative piece of writing upon which a film or television program is based. It carries all the words spoken by the actors, all the details about the scenario, and all the necessary set directions. The dialog, actions, expressions, and movements of the actors are all detailed in a screenplay.

There are specific layouts and formats for screenplays from which one cannot deviate. Whether a screenplay is wholly original or taken from another piece of writing, such as a history book or a novel, it must contain the details necessary for a movie to be directed correctly, so it must bear the author’s intentions in a prescribed manner.

Steps for Writing a Screenplay

Samples for Writing a Screenplay

EXTERIOR: CITY STREETS OF NEW YORK – NIGHT  Front view on close-up of skyscrapers' mirror windows. Then the camera successively switches to showing city streets from a heig...
STAGE The stage is hidden in darkness. The only visible element is a neon tube encompassing the entire stage; it blinks with red light from time to time. In the background, i...
(Fade in)   EXTERIOR, ROAD HOUSE IN NEVADA – EVENING An old road house somewhere on a road in the Mojave desert, with a big blinking neon sign “OPEN 24/7,” and...