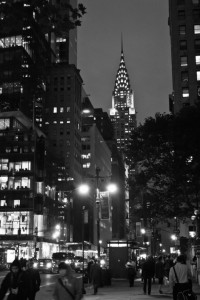 Front view on close-up of skyscrapers’ mirror windows. Then the camera successively switches to showing city streets from a height (about 100 feet), traces of white and red traffic lights, large closed mall, and a blinking neon sign of a cheap hotel. In the background, a saxophone plays a slow, melancholic melody.

A old four-storeyed brick building of a police department. All windows are dark, except the one on the third floor.

(Camera slides over the window)

A white man walks around the cabinet and talks to himself in a low voice. From time-to-time, he comes closer to a clipboard hanging on the wall, and gazes at photographs of victims of a serial murderer he is looking for. The room is clouded with cigarette smoke, and an ashtray is full of cigarette butts; the only source of light is a lampshade on a floor, and the clipboard’s backlight. The detective looks like he hasn’t slept for at least 40 hours.

LIEUTENANT MILES SALLIVAN, a police detective of about 50 years, single, divorced. Is graying at his temples. One of the best detectives in the district. He is wearing cotton pants with suspenders and a white shirt without a tie; his collar is unbuttoned. Lives alone in his small apartment in Lower East Side, and plays blues on his electronic-guitar in the evenings.

SALLIVAN (scratches his head, murmurs illegibly, so the viewers can hear only fragments of phrases): All right sir, once again… first victim on May, 2, Lower Manhattan… a secretary… no, wait… yes. Strangled. Then… yes, that district, a bum this time.

(He makes himself a cup of coffee, and looks at it with disgust. It is obviously not his first cup these days. He puts the full cup on a pile of papers, towering on a cluttered desk, and continues walking from corner-to-corner, completely forgetting about it.)

SALLIVAN: … The fifth was found in a canal… what was it..? Man, here, in Lower East Side! Could be my neighbors, God damn them with their loud parties. All right, sir… and the next two… all strangled with the same chain….

(He comes closer to the clipboard again, and stares at a paired photo. Its left half shows a pretty young woman of about 25 years old; the right half is a picture of her body found two days ago. Suddenly, the detective takes a deep breath and sighs loudly, violently ruffling his hair.)

SALLIVAN: Jesus! Seven bodies in two weeks! The guy must have a production plan.

(Hurried footsteps sound from a corridor. After a quick knock at the door, a young policemen rushes into Sallivan’s cabinet. The detective glances at him.)

SALLIVAN: (with anxiety creeping on his face): No way…

RILEY: Yes, sir, another one! A white man, approximately in his 30s. The patrol has found his body in the Bronx.

SALLIVAN: Is Goddard already there?

RILEY: Yes, sir. Same hand as our killer, but Goddard says this time it’s something new as well. He says you should see it on your own.

SALLIVAN: Okay, son, I’m on my way. Stay in touch.