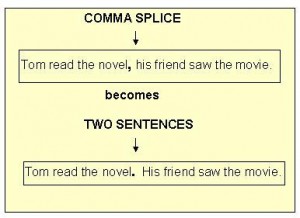 What is a Comma Splice?

For example, the sentence “Today the weather is fine, I am going to go for a walk” is fused, because there are two complete thoughts in it, and just a comma to separate them.

How to Avoid or Fix a Comma Splice?

– Use semicolons. Semicolons are “stronger” punctuation marks than commas, so using them is a good way to connect two independent clauses without a coordinating conjunction (e.g. and, but).

– Use subordinate conjunctions (after, although, because, since, before, how, lest).

– If the independent clauses are short and alike in their form. For example, “The clouds parted, the sun peeked out, and I went out of my apartment.”